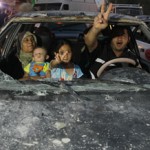 The Ireland-Palestine Solidarity Campaign today welcomed the commencement of the indefinite ceasefire between Palestinian resistance groups and Israel that came into effect at 7pm yesterday as a first step towards achieving Palestinian demand for their fundamental rights under international law, but urged caution regarding Israel’s track record of ceasefire violations and failure to honour terms.

According to the Palestinian Centre for Human Rights, at least “2,137 Palestinians, 1,643 of whom are civilians, including 513 children and 294 women” have been killed and “10,741 others, mostly civilians, including 3,262 children and 2,087 women wounded”. In addition the UN says that more than 17,000 houses were destroyed or severely damaged, leaving around 475,000 people displaced, and 58 medical facilitates and 216 schools were damaged or destroyed.

Martin O’Quigley, IPSC Chairperson said “After the slaughter that has taken place over the past 50 days, the IPSC – like the people of Gaza – welcomes this ceasefire. The terms of the ceasefire reportedly include an easing of the siege of Gaza, including allowing medical and reconstruction supplies in to the Strip, an extension of the fishing limits from 6 to 12 miles, and the end of the ‘buffer zone’. The IPSC welcomes these advances, but also cautions that Israel has a track record of not honouring the terms of such ceasefires, and indeed, of regularly violating ceasefire with bombings and shootings.”

“Furthermore, several outstanding issues remain, namely the opening of air and sea ports, the release of Palestinian political prisoners and the full lifting of the illegal seven year siege.  Meanwhile the Israeli occupation, and its associated human rights and international law violations, will continue unabated.  While the bombing may have ceased, the systemic and routine violence of this decades-old occupation will continue. The Palestinian people will never simply lie down and allow more and more of their land to be stolen and colonised, nor will they submit to an apartheid regime – for this reason Israeli violence against them will continue. The international community, civil society groups and individuals all have roles to play in helping to finally end Israeli apartheid by supporting the Palestinian-led campaign for boycott, divestment and sanctions (BDS). The international community should be to the fore in pressing for Israeli officials to be brought before the International Criminal Court and prosecuted for war crimes. If this call from the oppressed is not heeded, and Israel continues to enjoy complete impunity, we will undoubtedly be back in the same awful situation in another two or three years’ time. Such an outcome would be simply unthinkable,” Mr Quigley said.

“The situation for Palestinians in the region remains intolerable, and the IPSC will continue to campaign in solidarity with the Palestinian people’s struggle for freedom, just, equality and peace,” Mr. Quigley concluded.