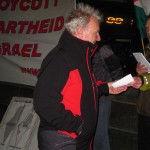 On the cold and dark evening of Thursday 19th January 2012, members and supporters of the Ireland Palestine Solidarity Campaign (IPSC) stood outside Dublin’s National Concert Hall to deliver a simple message to Portuguese Fado signer Ana Moura. That message was: “Please don’t perform in Apartheid Israel!”

Holding banners saying “Boycott Apartheid Israel” and “Stop the Ethnic Cleansing of Palestine”, the activists leafleted and engaged with Ana Moura’s fans who were attending the concert, making them aware of Ms. Moura’s plan to play a gig in Tel Aviv on 27th January and explaining how this was in breach of the Palestinian call for a cultural boycott of Israel and was in fact helping to legitimise Israeli Apartheid.

The exchanges with those going inside were very positive. Martin O’Quigley, Chairperson of the IPSC said that it was “the most receptive crowd of people I’ve ever leafleted”, and he reported that other said things like “if I had known, I wouldn’t have bought tickets”, “it will leave a sour taste during the concert”, and one South African woman commented that “we thought Apartheid was dead”. Some people even brought leaflets inside the venue to distribute. Mr. O’Quigley also said that several people even refused to go into the concert, even though we were not asking them to boycott the event: “One young couple I was talking to refused to go in, and another older couple went in and handed back their tickets. I advised everyone who stopped to talk, to contact Ana Moura and let her know how they felt”. Ana Moura also performed in Scotland a few days later, and the Scottish PSC reported a similar reception from her fans, commenting that the opinions of the audience at the Glasgow performance were clear: “Don’t perform in Israel – support the appeal from Palestinian civil society for a cultural boycott of Israel.”