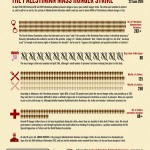 On Sunday 22nd June 2014 the mass Palestinian hunger strike in Israeli prisons – the longest such mass strike in Palestinian history – moved into it’s 60th day. We present and an info-graphic explaining why the strike is taking place, and what is going on inside the prisons and on the strike.

The strike is now taking place in the context of the mass Israeli collective punishment of the Palestinian people, ostensibly as part of a search for three missing Israeli teenage illegal settlers, who are presumed kidnapped. This collective punishment, which has seen a further 400 Palestinians arrested, at least four killed and many others injured, vast property destruction and theft, is of course illegal under international law.