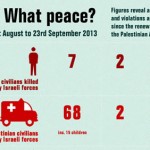 In the past three days, two Israeli soldiers have been killed by Palestinians in the Israeli-occupied West Bank. These attacks have generated countless headlines, both in Israel and internationally. Alas, the same cannot be said for the 7 Palestinians killed by Israeli forces in the weeks since the Palestinian-Israeli ‘peace talks’ reopened at the end of July last (or indeed, the 11 other Palestinians already killed this year).

Of course, in the Israeli press and polity, the killings have led to denunciations of Palestinians as not being ‘serious’ about peace. Ignore for a moment the fact that the killings were unconnected – one solider was murdered in what appears to be a bizarre and ultimately tragic act of desperation by a Palestinian trying to secure the release of his imprisoned brother, and the other was killed during clashes which had injured many Palestinians in occupied Hebron following the illegal lockdown of the Bab al-Zawiyeh area to facilitate a religious parade by extremist Israeli settlers through the area. If we are to believe that the unrelated killings of two Israeli soldiers means Palestinians are not ‘serious about peace’, please consider the following evidence presented in our infographic and what it says about the Israeli state’s view of peace. Yet there is is virtual silence about these attacks on, and violations against, Palestinian people, property and land – not just in Israel, but internationally.

Silence is complicity. BDS* is an effective answer!