Infographic: Convictions of Israeli military personel for deaths of Palestinians as of 2013 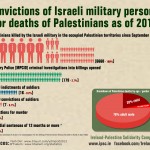 The Israeli human rights organization Yesh Din last week published statistics regarding investigations by the Israeli Military Police Criminal Investigations Department (MPCID) into the circumstances surrounding the death of Palestinians since September 2000, as well as figures for convictions and penalization relating to these incidents. This is what those figures look like:

According to B’Tselem, at least 6,660* Palestinians have been killed to date by the Israeli occupation military forces in the occupied Palestinian territories since September 2000.

The figures published by Yesh Din show that the MPCID opened only 179 criminal investigations concerning the killing of Palestinians by Israeli soldiers. Only only 16 of these cases led to indictments, with only 7 resulting in convictions. Of those seven, none were found guilty of murder, and only 1 was given a custodial sentence of over 12 months (the solider who was convicted of manslaughter following the shooting to death of British citizen Tom Hurndall inGaza in 2003). No solider spent more than a year in prison for killing Palestinians.

“Just 16 of the investigation files into incidents in which Palestinians were killed led to indictments. In these indictments, a total of 21 soldiers were charged with offenses relating to the death of 18 Palestinian civilians and one foreign national. Some of the defendants were charged with offenses relating to the disruption of the investigation rather than to the incident itself. The military courts ultimately convicted seven soldiers of offenses relating to the death of just six civilians – five Palestinians and one British citizen. Two additional soldiers were convicted of offenses relating to the attempt to pervert the course of justice in the framework of these proceedings. In addition, the offenses with which the soldiers were charged and the penalties handed down by the courts reflect a disregard for Palestinian life. Just a single soldier was convicted of manslaughter (in a case involving the death of a British citizen) and was sentenced to eight years’ imprisonment. Four soldiers were each convicted of manslaughter and sentenced to periods of imprisonment of a few months; in some cases, the sentence was suspended. Two officers were each convicted of negligence following the death of an infant after bullets hit the car in which he was traveling. One of the officers was sentenced to one month’s military labor and a four-month suspended sentence, and the other to 30 days’ imprisonment and a four-month suspended sentence.”

What these incredible figures show is that Palestinian lives are next to worthless, that a culture of impunity and racism runs rampant in the Israeli military and, in the words of Yesh Din,  such figures “encourage the unlawful use of weapons by soldiers, even in clearly civilian situations such as demonstrations”.

It is clear that such a culture of impunity reigns because the Israeli state itself enjoys virtual immunity from censure and sanction by the international community. These figures are a stark reminder of why Palestinians have called for an international campaign of boycotts, divestment and sanctions (BDS) against Israel, aimed at forcing it to end its occupation and comply fully with it’s obligations international law.

* The Yesh Din report says 5,000, but our reading of B’Tselem’s figures reveals 6,556, plus 4 Palestinians killed in the past number of weeks.