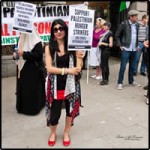 Members and supporters of the Campaign to Free Marwan Barghouthi and All Palestinian Political Prisoners and the Ireland-Palestine Solidarity Campaign demonstrated outside the Dail last Thursday 12th June to mark the 50th day of a mass hunger strike by Palestinians in Israeli jails.

Around 125 prisoners have embarked on an open-ended hunger strike to protest Israel’s use of Administrative Detention, a form of internment without charge or trial, against Palestinians living under military occupation.  Amnesty International has called for an end to the practice saying it is “arbitrary detention” that “violates the right to a fair trial”, has been used “to trample on the human rights of detainees for decades” and is used to “suppress the legitimate and peaceful activities of activists”. Around 80 hunger strikers have already been hospitalised and their lives are now in danger in what is the longest mass hunger strike in Palestinian history.

In response, the Israeli state is now trying to fast-track legislation that will allow force-feeding of the strikers, an act which has been condemned by the UN Special Rapporteur on Torture and the World Medical Association.

The protest asked the Irish government to condemn and call for end to Israel’s widespread use of administrative detention, which is in violation of the Fourth Geneva Convention which states that interment can be used “only if the security of the Detaining Power makes it absolutely necessary.” In related news, John Halligan TD asked a question of the government during on Tuesday evening, the transcript is below. While the IPSC is glad that the Irish government is monitoring the situation and has expressed it’s concern over the continuing use of Administrative Detention, we are disappointed that it will not call for an unequivocal end to the practice. This is the quickest and safest way to end the hunger strike before there are any fatalities.

Deputy John Halligan: Today is the 55th day of the mass hunger strike of Palestinian administrative detainees in Israeli prisons protesting against their ill treatment and internment without trial or charge. Their conditions are deteriorating daily. Approximately 80 hunger strikers have been hospitalised and many are in grave danger of losing their lives. The Israeli state is now trying to pass legislation that will allow the force-feeding of the strikers which prisoners have labelled a form of torture. Amnesty International and other groups around the world have said the same. The latest update I received some minutes ago from Palestine is that the Bill has passed the second and third reading in the Knesset and may very well be introduced into law by Monday.

It is the longest mass hunger strike among prisoners in Palestinian history and the hunger strikers remain steadfast in their demands to end the policy of administrative detention. I ask the Minister to condemn Israel’s widespread use of administrative detention which is in violation of the Fourth Geneva Convention which states that internment can be used “only if security of the detaining power makes it absolutely necessary”. Amnesty International has called Israel’s administrative detention arbitrary detention that fails to fulfil the international criteria for a just trial, and inhumane and degrading and it notes that Israel uses it to suppress the legitimate and peaceful activities of activists.

The Tánaiste and Minister for Foreign Affairs and Trade, Deputy Gilmore, has constantly spoken on the inhuman treatment of the Palestinian people in general. Israel appears to listen to no one. As of 2008, Israel was in violation of 30 UN Security Council resolutions and 60 UN resolutions. The manner in which Israel treats the Palestinians would not be tolerated from any other state in the world. It is appalling and unacceptable. Given this country’s record in condemning human rights violations around the world, the time has come for us to call in the Israeli ambassador and make it clear to him that we will not accept people, some as young as 17 years of age, being arrested without charge, interned without charge and tortured. Prisoners have a right not to accept food under protest yet the state has gone so far as to commence the introduction of a law to force-feed the detainees. Ireland is a country that has always stood up for human rights around the world and condemned the Israelis. It is not good enough to simply show our concern, as some have suggested. We must express our condemnation.

Minister of State at the Department of the Environment, Community and Local Government (Deputy Jan O’Sullivan):   I thank Deputy Halligan for raising this issue which I am taking on behalf of the Tánaiste and Minister for Foreign Affairs and Trade, Deputy Gilmore.

Israel is undeniably faced with serious security challenges and therefore may have recourse legitimately in exceptional circumstances to special powers. However, there are clear grounds for concern that administrative detention is being used in some cases to suppress legitimate dissent and protest. The instances of repeated extensions of detention orders can also mean individuals may be detained for prolonged periods, even several years, without ever having charges laid against them. The use of intelligence material as sole evidence for the decisions by military tribunals can result in denial of access to prosecution evidence to the detainees and their legal representatives. Any system in which a person can be imprisoned for years with no means to challenge the basis of their detention is clearly unacceptable.

Ireland has repeatedly drawn attention to these concerns with administrative detention both directly with the Israeli authorities and in discussions at EU or UN level, including in the UN Human Rights Council last March where our national statement under item No. 7 made clear our long-standing concerns about this practice. Ireland has also raised this issue in EU discussions on the Middle East and ensured the EU also has explicitly criticised on several occasions in recent years, the excessive use by Israel of administrative detention. There has been a significant reduction in the use of the practice by Israel in recent years but the problem remains a serious one. We will continue to make known our concerns about the practice overall to the Israeli authorities at all appropriate opportunities.

There have been repeated protests by Palestinian detainees in recent years over the use of administrative detention. In common with our EU partners, we have encouraged the parties to engage in negotiations which address the legitimate complaints of the detainees and to avoid any provocative actions which would risk the health or life of the detainees. Our missions in Tel Aviv and Ramallah remain in contact with civil society groups dealing with prisoners’ rights, including the issues of administrative detention and hunger strikes, as well as working with our international partners to support progress on these very difficult issues.

The use of hunger strikes is a very dangerous tactic which we cannot encourage. It is notable the Israeli authorities have responded to recent hunger strikes in a manner to avoid the death of any prisoner. They are clearly alert to this danger but there must always be a very strong risk, particularly with repeated hunger strikes, that the authorities will eventually conclude that they must make a stand, and refuse to compromise further. This is perhaps a particular danger at this moment when the Israeli Government and public are, understandably, strongly focused on the abduction of three teenagers who are still missing and whose safe return we all hope for.

It is the case that a draft Bill to permit the force feeding of hunger strikers has been submitted to the Israeli Knesset. However, no final decision on its approval has yet been taken by the Knesset. The Israeli Medical Association has declared, as have several human rights groups, that force-feeding is in breach of medical ethical standards. There is some expectation that any possible new law might be challenged in the Israeli courts on the grounds of its constitutionality. We would strongly urge the Israeli authorities to refrain from the force-feeding of hunger strikers in the event of parliamentary approval of this proposed law.

Deputy John Halligan:   I welcome the Minister’s comprehensive response to this serious issue. It is appropriate there are several former Israeli soldiers, Breaking the Silence, in Dublin today who gave a presentation as to how they were forced to treat Palestinians and violate their human rights. Ireland never stands idly by and always opposes the violation of human rights. The chances of Israel paying any attention to us, however, are remote when it is already in breach of over 90 UN and UN Security Council resolutions. It is important, none the less, that we make it known to the Israeli ambassador to Ireland and the Israeli Government that we will not tolerate the force-feeding of hunger strikers and the detention of individuals without charge. From the information I received today, I note some of those hunger strikers, even though they are critically ill, are being constantly asked to eat. When they refuse, their guards eat the food in front of them. It is appalling what is happening in these hospitals in Israel.

I condemn the recent abduction of three Israeli students and hope they are returned safely. I condemn all violence from all sides. The history of violence against Palestinians by Israeli forces has been well-documented by various Ministers for Foreign Affairs, from Deputy Martin to Deputy Gilmore and others. I am happy the Minister of State, in her response, condemned what Israel is doing. However, we need to be steadfast in our support of human rights. People have a right to protest without being arrested, shackled to their beds and being force-fed. If the legislation in question is passed in the Knesset, it should be condemned.

Deputy Jan O’Sullivan:   It is important we use all the ways we can to raise this issue through the EU, the UN or directly with the Israeli Government, as well as the group visiting Ireland referred to by Deputy Halligan, which is obviously condemning it and doing everything it can to change the system. I will bring Deputy Halligan’s views to the attention of the Tánaiste and Minister for Foreign Affairs and Trade, although he is well aware of them. Ireland will use every opportunity to address this issue.