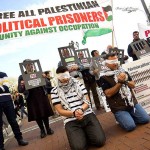 On Thursday 16th April the Ireland-Palestine Solidarity Campaign held a solidarity action for Palestinian political prisoners held in Israeli jails at the top of Grafton Street. For an hour members and supporters, including many from the Palestinian community stood with placards, banners and flags in very effective visual display to get the message out to the public about the appalling plight of the Palestinian prisoners. Palestinian Prisoners’ Day is April 17 every year, however due to this falling on a Friday this year, we are staged our  event on April 16th to reach as many people on the late shopping evening as possible.

We also handed out hundreds of leaflets to people, and featured in countless photographs from passersby. To read a PDF of the leaflet we handed out, please click here.

You can also check out our latest Palestinian prisoners infographic by clicking here.

Finally, we’d like to thanks everyone who came along to show their solidarity, and especially to Brian and the others in our ‘art department’ for making the display so striking, and Fatin Al Tamimi for the photographs.

Since the beginning of the Israeli occupation of Palestinian territories in 1967, between around 800,000 Palestinians have been detained by the Israeli military. According to Amnesty, “many [have been] held incommunicado for prolonged periods”. This figure represents approximately 40% of the total male population in occupied Palestinian territory. At present, according to the latest available figures, there are over 6,000 Palestinian political prisoners in Israeli jails, including 454 internees, 17 parliamentarians, 25 women and 163 children.

The issue of prisoners, particularly child prisoners, is one that is often overlooked in discussions around the Palestine-Israel issue. Yet the prisoners issue goes to the very heart of Israeli policy in Palestine – the decapitation of political movements, the criminalisation and ‘securitisation’ of young people who resist occupation, not to mention the psychological and traumatic effects detention and abuse has on young people who go through the prison system. Even NGOs who work with prisoners are targets of Israeli policy, with offices being raided and advocates themselves detained.

Israel practices two methods of detaining Palestinians – internment without trial (Administrative Detention) and ‘convictions’ in a non-jury military court system with a 99.7% conviction rate for Palestinians, “whose proceedings do not meet international standards for fair trial”, according to Amnesty. In addition, torture and ill treatment (of both children and adults) along with other violations of human rights and international law are frequent according to human rights organisations like Amnesty and HRW.