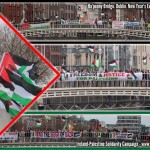 On New Year’s Eve, members and supporters of the Ireland-Palestine Solidarity Campaign in both Dublin and Sligo took to the streets to see out 2016 with displays of solidarity with the people of Palestine who face into another year of oppression, occupation, colonisation and injustice at the hands of the apartheid Israeli state. The gatherings were to mark the eighth anniversary of the 2008/09 massacre called ‘Operation Cast Lead’, when Israeli occupation forces attacked Gaza for 23 days killing over 1,400 Palestinians, including more than 300 children.

In Dublin over a hundred people gathered on the city’s iconic Ha’penny Bridge, and along with scores of flags, unfurled banners reading “End the Siege of Gaza”, “Free Gaza”, “Free Palestine – End the Occupation”, “Unity Against Occupation”, “Boycott Apartheid Israel” and “Freedom and Justice for Palestine”.

In Sligo, over fifty people assembled on Hyde Bridge with flags and banners. Participants displayed a banner calling for a boycott of Israeli goods and carried placards which read: “Freedom and Peace in Palestine”, “Let Gaza live” and “End U.S. Aid to Israel”.

We feel this was an apt way to end the year and face into 2017, which we hope will be a year that brings up closer to freedom, justice and equality for the Palestinian people and a just and lasting peace in the Palestine-Israel region.