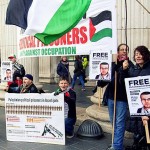 Activists in Dublin, Ireland, protested in an emergency vigil on Saturday, 13 February, demanding the release of hunger-striking Palestinian journalist, Mohammed al-Qiq, on his 81st day of hunger strike. The Ireland Palestine Solidarity Campaign called for the urgent action to support Al-Qiq, 33, who is imprisoned without charge or trial under Israeli administrative detention. He is currently held in HaEmek hospital in Afula under “suspended” administrative detention by a ruling of the Israeli Supreme Court.

However, he is not free to leave the hospital and his detention can be reimposed at any time. Al-Qiq launched his hunger strike on 25 November 2015 in protest of his torture under interrogation and has maintained it since in protest of his imprisonment without charge or trial.

Al-Qiq is in severe danger of death at any time; since 10 February, Israeli authorities have ceased all negotiations with his lawyers. The protesters demanded that the European Union take action to demand al-Qiq’s immediate release and an end to the practice of administrative detention, calling on the EU to suspend its Association Agreement with Israel, granting free trade and other privileges, because of its violations of international law and Palestinian human rights.