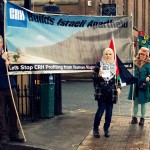 On the morning of Wednesday 8 May Irish multinational CRH will held their Annual General Meeting in the Royal Marine Hotel, in Dun Laoghaire. The Ireland-Palestine Solidarity Campaign held a small protest outside the venue. 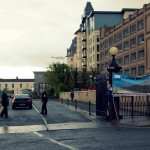 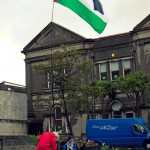 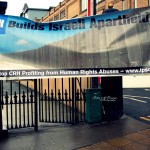 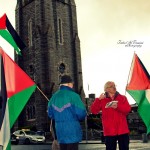 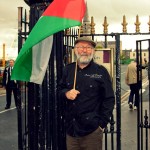 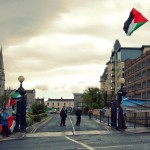 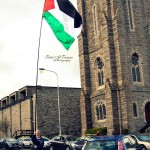 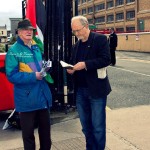 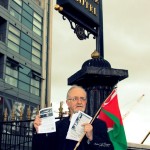 The IPSC organised this protest because CRH owns 25% of the Israeli company Mashav Initiative and Development Ltd which, in turn, owns Israel’s sole cement producer Nesher Cement Enterprises Ltd. Nesher provide up to 90% of all cement sold in Israel, including cement used in the construction of Israel’s illegal separation wall in Palestine and illegal settlements and checkpoints. We are calling on CRH to end its shameful investment in Israel and to stop profiting from the occupation of Palestine by divesting from its Israeli interests.

For the past three years the issue of CRH’s investment in Israel has been raised in the AGM proceedings by IPSC members who are also shareholders in the company. Last year the IPSC presented a 10,000-signature strong petition to the CRH Board calling for divestment from Israel. CRH has yet to take action.

For more about the IPSC’s CRH Divestment Campaign see: http://www.ipsc.ie/crhdivest