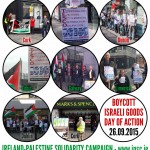 To coincide with the visit to Ireland by Riya Hassan of the Palestinian BDS National Committee, the Ireland-Palestine Solidairty Campaign organsied a ‘Boycott Israeli Goods’ day of action on Saturday 26th September focusing on the chain retailer Tesco across the island of Ireland.

Tesco have been a particularly eager and egregious seller of Israeli products, especially fruit, potatoes and herbs – profits from which are funnelled back into the Israeli economy and used to fund the Israeli military’s frequent war crimes and continuing brutal occupation of Palestine. Hardly a  week goes by when there is not some form of Israeli goods on sale in your local Tesco. Our aim was to  bring the message to Tesco that each Israeli product sold contributes to the oppression of the people of Palestine – to tell the management of Tesco that the store must stand on the right side of history – they must stop selling these items because every little helps Apartheid!

The message, at least, was received loud and clear as we learned from a sympathetic staff member that prior to the action, staff had been instructed to temporarily remove Israeli products from the shelves of at least one branch. Judging by the lack of products in other stores, it seems a similar policy was enacted in at least some other outlets.

We ask you to please write to Tesco –  local stores and head office – and complain about the continued presence of these products of Apartheid in their stores, and to urge them to take them off the shelves once and for all!