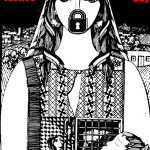 To mark International Women’s Day 2012, the Ireland-Palestine Solidarity Campaign wishes to highlight the case of Palestinian political prisoner and hunger striker Hana’ Shalabi. 29-year-old Hana’ has been on hunger strike for 22 days. She is protesting against her internment without trial, and brutal and degrading treatment at the hands of the Israeli state. After two weeks on hunger strike, decomposition of muscle tissue (including the heart muscle) commences, leaving the faster in a vulnerable position.

Who is Hana’ Shalabi?

Prior to her current imprisonment, Hana had been detained by Israel for a two year period without charge or trial. She was released in October 2011 as part of the Palestinian-Israeli prisoner exchange. On 16 February 2012, she was taken from her home in Jenin by the Israeli military. It was reported that both herself and members of her family were beaten, and she was again interned without trial. Upon arrival at Salem Detention Center, Hana’ was forcibly strip searched by a male soldier and again assaulted. Hana’ described her treatment as “utterly degrading” and “not acceptable in all customs of the world”. She subsequently began a hunger strike and was placed in solitary confinement as punishment. On 27 February she was eventually transferred to a cell with other detainees. Hana’s family have not been allowed to visit her.

However, Hana’s hunger strike, like that of her compatriot Khader Adnan before her, is not about herself. It is about justice. Over the last 43 years, an estimated 10,000 Palestinian women have been imprisoned by the Israeli state. At present, 6 Palestinian women remain incarcerated despite an agreement by Israel that all female political prisoners would be included in the October 2011 prisoner exchange. Palestinian women are held mainly in Hasharon and Damon prisons, both of which are located inside Israel, in direct contravention of Geneva Conventions, which state that an Occupying Power must detain residents of an occupied territory inside that territory.

According to ADDAMEER, the Palestinian prisoners’ rights NGO, “the majority of Palestinian women prisoners are subjected to some form of psychological torture and ill-treatment throughout the process of their arrest and detention, including various forms of sexual violence that occur such as beatings, insults, threats, body searches, and sexually explicit harassment”. Moreover, “approximately 38% of Palestinian female prisoners suffer from treatable diseases that go untreated” and “there are no specialized gynaecological services available” for Palestinian women prisoners.

ADDAMEER also states that pregnant prisoners are transferred to hospitals with “hands and feet typically shackled with metal chains. The women are then chained to their beds until they enter the delivery room and are shackled once again only minutes after delivery”. Furthermore, “sexual harassment of Palestinian women prisoners also occurs through threats of rape and sexually degrading insults made by prison personnel. These occurrences are a fundamental part of Palestinian women’s prison experience and should be understood as a common and systematic form of racial and gender-based State violence”.

It is the view of the IPSC that the Administrative Detention regime is only one aspect of the larger prison regime used by Israel to suppress Palestinian resistance to occupation and Apartheid. At present there are over 4,450 Palestinian political prisoners held in Israeli jails. While more than 300 are Administrative Detainees, the vast majority are ‘convicted’ by non-jury Israeli Military Courts. These courts, biased from the outset, do not meet international fair trial standards. As Amnesty points out, Palestinians “continue to face a wide range of abuses of their right to a fair trial. They are routinely interrogated without a lawyer and, although they are civilians, are tried before military not ordinary courts”.

Furthermore, Amnesty says that “consistent allegations of torture and other ill-treatment, including of children, were frequently reported. Among the most commonly cited methods were beatings, threats to the detainee or their family, sleep deprivation, and being subjected to painful stress positions for long periods. Confessions allegedly obtained under duress were accepted as evidence”. It is worth noting that Palestinians in the Occupied Territories are subject to Israeli military law, while Israel’s illegal settlers are governed by Israeli civil law – a clear example of Israel’s Apartheid system.

Prisons: Only One Aspect of Apartheid

In turn, it is our view that the brutal and repressive prison regime is only one aspect of the occupation of Palestine by Israel and its associated Apartheid regime. Indeed, when one considers the ongoing siege of Gaza and fragmentation of the West Bank, Palestine can be viewed as one large open air prison camp.

In 1948 Israel was established as a Zionist state in historic Palestine after a military campaign that saw the forced expulsion of over 700,000 Palestinians from their lands. Palestinians – both those who managed to remained inside Israel and those in the West Bank, Gaza and surrounding refugee camps – have been victims of brutal Israeli state aggression ever since.

In 1967 Israel occupied Gaza, the West Bank and East Jerusalem and began to militarily control Palestinian life there. Today the majority of Palestinians still remain trapped as refugees or live under Apartheid Israeli military occupation in Gaza and the West Bank. Those still left in what became the Israeli state continue to suffer under a oppressive, racist and sectarian system:

• House Demolitions – Over 24,800 Palestinian homes have been demolished since 1967, whilst Israel’s planning regime means it’s virtually impossible for Palestinians to build ‘legally’.

• Illegal Settlements – There are almost 500,000 colonial settlers in over 200 illegal Israeli Jewish-only settlements in Palestine. Often settlers evict Palestinian families from homes they have lived in for generations.

• No Freedom of Movement – Palestinians are subject to a rigid permit system. There are over 500 Israeli-controlled checkpoints and roadblocks in the West Bank. Israel operates a segregated road system under which Palestinians cannot use settler-only roads.

• Apartheid Wall – Israel continues build its 720km Apartheid Wall, stealing another 10% of Palestinian land and concentrating the Palestinian population into ghettoes, reminiscent of Bantustans in Apartheid South Africa. The Wall was declared illegal by the International Court of Justice in 2005.

• UN Resolutions – Israel is in violation of over 30 UN Security Council resolutions.

• Collective punishment against civilians and extra-judicial assassinations of political leaders are common tactics of the Israeli state.

• Palestinian Citizens of Israel – Palestinians in Israel live as second class citizens in a state that grants Jewish-Israeli citizens more rights, and discriminates against them in a myriad of covert and overt ways. Paramount among these is Israel’s ‘Law of Return’, which grants Jewish people anywhere in the world the automatic right to Israeli citizenship. In contrast, Israel refuses to grant Palestinian refugees and their descendants the ‘Right of Return’ they theoretically enjoy under UN Resolution 194.

Palestinian women have suffered immensely under the occupation. Not only do they suffer as Palestinians, they also suffer as women. For example, the World Health Organisation states that between 2000 and 2006, there were 69 cases of women giving birth at Israeli checkpoints. Of these, 35 of the newborns, and five of the mothers, have died. A 2005 report by UN Special Rapporteur on Human Rights in the OPT stated: “Occupation and the wall unevenly violate women’s rights. Palestinian women are routinely harassed, intimidated and abused by Israeli soldiers at checkpoints and gates. They are humiliated in front of their families and subjected to sexual violence by both soldiers and settlers … Restriction of movement owing to the occupation severely impedes Palestinian women’s access to education and health. Restrictions on movement limit opportunities for independence and decrease the number of women seeking formal education or employment … Women’s health has suffered as a result of their inability to reach health centres … Unemployment and poverty resulting from the occupation have been shown to produce divorce and domestic violence. The Israeli Nationality and Entry into Israel Law of 2003 aims to stop family unification when one spouse is a resident of the Occupied Palestinian Territory. The result of this law is that thousands of affected family members live separately from each other with no legal means available to unify the family. The only way to maintain the unity of the family is to reside illegally in Israel, in permanent fear of investigation and expulsion. This places an immense burden on the psychological state of Palestinian women.”

Yet women are not merely victims, they are part and parcel of the resistance to occupation and Apartheid. Indeed, many – such as Jawaher Abu Rahmah who was killed by Israeli occupation forces while non-violently protesting against the Apartheid Wall in the village of Bil’in in 2011 – have paid the ultimate price for their activities. Women’s involvement in Palestinian resistance goes back to at least 1929, when British Mandate occupation forces killed 9 women during Palestinian rioting. In 1939, during the Arab Revolt, British forces interned Sathej Nassar. This “very dangerous woman”, to quote the British authorities of the time, became the first female Palestinian political prisoner and remained in prison for a year.

Women have continued to play an important role in Palestinian resistance to Israeli Apartheid in the years since the 1948 Nakba, and especially since the occupation of the West Bank, Gaza and East Jerusalem in 1967. Palestinian women display remarkable qualities of endurance; Living under stress in poverty, their homes destroyed, lands razed or expropriated, children sick, husbands imprisoned, fathers killed, and more, they plant seeds of hope, fulfil daily social roles, and participate in political and everyday resistance. Palestinian women are mothers, carers, fighters, activists, workers, teachers and parliamentarians.

On International Women’s Day 2012, and every day, the IPSC salutes the women of Palestine and their immeasurable contribution to their people’s struggle for human, national and political rights.

The IPSC calls for:

•  the immediate release of Hana’ Shalabi;
•  the international community, especially the Irish government, to intervene in this case to save Hana’s life;
•  an end to the Administrative Detention and Military Court regimes;
• an end to end torture, beatings and ill treatment in Israeli jails;
• an end to the targeting of Palestinian women
• for Israel to end the occupation of Palestine and comply fully with its obligations under international law, including allowing the Palestinian Right of Return;
• for Irish people and the Irish government to support the 2005 Palestinian civil society call for a campaign of Boycott, Divestment and Sanctions (BDS) against Israel until such time as it complies with the above demands.
ENDS