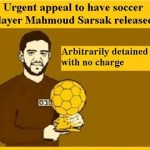 Over the past number of days, FIFA’s Sepp Blatter, FIFPro (“the voice of all professional footballers in the world”), footballing legend Eric Cantona, Show Racism the Red Card and film director Ken Loach (‘Looking for Eric’) have all made statements expressing concern for the life of Mahmoud Sarsak, a 25-year-old Palestinian national team footballer who has been on hunger strike for 87 days in an Israeli prison protesting against his three year internment without trial.

After coming close to death on Sunday, Mr. Sarsak has agreed to take limited amounts of milk to prolong his life until Thursday when the Israeli Supreme Court is due to review his case. His lawyer, Mohammad Jabarein, told the Palestinian news agency Ma’an that Sarsak has decided that if the Supreme Court does not agree to release him he will refuse all supplements until his death. Mr. Sarsak is one of three Palestinian political prisoners currently on hunger strike.

FIFA President Sepp Blatter expressed “grave concern and worry about the alleged illegal detention” of Mr. Sarsak, and stated that due to the “graveness of the situation, FIFA urgently calls on IFA [the Israeli Football Association] to draw the attention of the Israeli competent authorities to the present matter, with the aim of ensuring the physical integrity” of Mr. Sarsak and as well as his “right for due process.”

The statement from FIFPro said that “FIFPro, the voice of all professional footballers in the world, demands that Mahmoud Sarsak be released from prison. The Palestinian national team player has been imprisoned by the Israeli government for three years without any trial…. FIFPro is also very concerned about the situation of many other professional footballers in Palestine. Sarsak is not the only player who is suffering from the actions of the Israeli government. There are stories of other players who have been harassed, arrested or even killed.”

Philippe Piat, FIFPro’s vice-president and president of FIFPro Division Europe went on to say that for many players in Palestine, there is no real freedom of movement and that “freedom of movement is a fundamental right of every citizen. It is also written down in the FIFA Regulations that players must be allowed to play for the national team of their country. But actually for some footballers it is impossible to defend the colours of their country. They cannot cross the border. They cannot visit their family. They are locked up. This is an injustice.’

An Tanaiste and Minister for Foreign Affairs and Trade, Eamon Gilmore mentioned the hunger strike in a written answer to a question from Padraig MacLoughlin TD on Tuesday 13 June. The Minister stated that, he is “very concerned about two [sic] prisoners who did not end their hunger strikes, and are now believed to be in a critical condition. I strongly urge both sides to seek to resolve the issues involved in these cases with all possible urgency”.

Responding to the Minister’s statement, Chairperson of the Ireland-Palestine Solidarity Campaign (IPSC), Mr. Martin O’Quigley said, “the Minister’s concern over this issue is to be welcomed. However, it is unfortunate that in urging ‘both sides to resolve the issues’ he appears to suggest there is an equivalence between kidnapper and abductee. Mr. Sarsak was detained and held without trial for three years by Israeli occupation forces, and is now approaching death as he protests this injustice. The IPSC again urges the Minister to intervene immediately to attempt to save the lives of Mr. Sarsak, and the other hunger strikers Akram Rikhawi and Samer al-Baraq. Inaction is not an option”.

Mr. O’Quigley also highlighted the fact that Israel was due to host the 2013 UEFA Under-21 European Championship, saying that “it is absolutely hypocritical for UEFA to allow Israel to host the 2013 Under-21 European Championship. Israel kills and imprisons Palestinian footballers, and has twice bombed the Palestinian stadium in Gaza. It is unacceptable that this serial human rights abusing state should be rewarded for these attacks against Palestinian sport by allowing it the privilege of hosting such an illustrious competition”.

Mahmoud Sarsak from Gaza’s Rafah refugee camp was detained by the Israeli military on July 22, 2009, when he arrived at the Erez/Gaza checkpoint on his way to the West Bank after getting Israeli permission to join the Palestinian National Team team there. At the checkpoint he was detained, interrogated for 30 days and since then he has been held without charge or trial under Israel’s Internment of Unlawful Combatants Law – a law described by the Israeli human rights group B’Tselem as “unconstitutional” and not in “comport with international law”. Despite never having been charged, 25-year-old Sarsak’s detention order has been renewed six times. After the sixth renewal, Sarsak embarked on an open-ended hunger strike on 19 March and has been refusing food for 87 days. (A full briefing on Mr. Sarsak from the Palestinian prisoners’ rights NGO Addameer can be found in the ‘Notes for Editors’ section below)

Akram Rikhawi from Gaza was arrested by Israeli occupation forces in 2004 and sentenced to 9 years’ imprisonment by a military court. He has been held in a prison medical centre ever since, as he suffers from various chronic conditions, including diabetes, asthma and osteoporosis. Rikhawi launched his hunger strike on 12 April, demanding that his medical condition be considered during the discussion of his request for an earlier release. Every prisoner is entitled to ask to be considered for early release when at least two thirds of the sentence has been served. Physicians for Human Rights-Israel has been trying to gain access to Akram since 6 May, but have been consistently denied. He is now on his 63rd day of hunger strike.

Samer al-Baraq, from the village of Jayyous, near Qalqilia, has been on hunger strike since May 22. He has been interned by Israel for almost two years without charge or trail under the Administrative Detention regime. Baraq was assured by that he would will be released after the mass hunger strike of over 2,000 prisoners came to a negotiated end, however his administrative detention order was renewed for another three months in violation of the terms of this agreement, thus forcing Mr. al-Baraq to resume his strike. He is now on his 24th day of hunger strike.