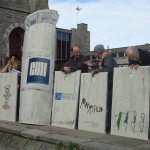 For the fifth consecutive year, members and supporters of the Ireland-Palestine Solidarity Campaign have staged a protest outside the annual general meeting of Irish multinational CRH in Dun Laoghaire.

Campaigners held flags and a corriboard replica of the wall in a protest asking the company to divest from their 25% stake in the Israeli company Mashav, which is a holding company for Nesher, Israel’s sole cement manufacturer. Nesher has provided cement to the Israeli government and private enterprises that violate international law, including the Geneva Convention, by building the illegal separation wall, illegal Israeli-only settlements and associated infrastructure and checkpoints which dramatically hinder Palestinian freedom of movement. The crowd stood outside the Royal Marine hotel and chanted “CRH – Divest now!” and “Boycott Israel” as shareholders entered the meeting.

Meanwhile, a member of the IPSC asked the CRH Board about the status of, and CRH’s attitude to, the complaint submitted to the OECD by the IPSC three years ago and which CRH has yet to respond to, and urged the company to divest from its Israeli subsidiary.

Martin O’Quigley, Chairperson of the IPSC said “Today’s demonstration started very early, but it simply doesn’t compare to the experiences of Palestinian workers who have to get up and start to queue at around 4am every morning thanks to the wall and checkpoints built by Israel with what essentially amounts to CRH cement.”