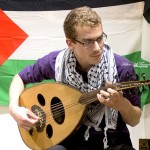 To mark the annual UN International Day of Solidarity with the Palestinian People on Sunday 29th November 2015, the Ireland-Palestine Solidarity Campaign (IPSC), The New Theatre and Connolly Books were proud and honoured to present a hugely successful Palestinian Culture Night in Dublin.

The evening saw hundreds of people packing the two floors in the venue to experience an amazing evening of delicious food, magical music, moving poetry and sombre prose, culminating in a full house screening of ‘When I Saw You’, an award-winning drama film set in 1967, by Palestinian director Annemarie Jacir.

The date also represented the 14th birthday of the IPSC, and to mark this there was an exhibition showcasing political posters from the IPSC archive in the venue.

The evening opening with a welcome by IPSC Chairperson Martin O’Quigley, who thanked people for coming and explained why it is so important to show solidarity with the people of Palestine as they struggle for their rights, freedoms and dignity against a brutal occupation which enjoys the support of, and impunity granted by, Western powers – including the Irish government. He called for people to support the Palestinian-led Boycott, Divestment and Sanctions (BDS) movement.

The next to speak was IPSC Vice Chairperson Fatin Al Tamimi, a Palestinian woman from Hebron, who spoke about what the day means to Palestinians, and read a poem in English and Arabic, accompanied by her son Abdullah Bayyari on the oud – a traditional Palestinian stringed instrument.

There were further poetry readings by Irish poet Catherine Ann Cullen who read two Palestinian poems and one of her own compositions, and Nassim Abu Khalaf , a young Palestinian man living in Dublin who read Mahmoud Darwish’s ‘Identity Card’ in Arabic and English. Another Palestinian man, Tarek Abou Khadra, read from Mourid Barghouti’s classic memoir ‘I Saw Ramallah’, and several more musical pieces were performed by Abdullah. In between readings and performances there was modern and traditional Palestinian music played over the sounds system while people chatted and sampled the food which was donated by Jerusalem Restaurant, The Silk Road Café, and Umi Falafel – all Palestinian-run restaurants in Dublin, as well as by individual Palestinian and Irish volunteers.

Finally, before the film screening, two short Palestinian poems – ‘Nakba’ by Remi Kanazi, and ‘We Teach Life, Sir’ by Rafeef Ziadah – were shown on the big screen.

Below are some images from the event, and a short video of Abdullah playing the oud to give you a flavour of the evening.

A word of thanks

Finally, we would like to thank all of our volunteers on the evening, and those who helped make it happen; Jennifer, Sue, Emmet, Sarah, Suzanne and Terry from the IPSC; Clara, Anthony and Cien from The New Theatre; Our readers and performers, Fatin, Tarek, Abdallah, Nassim and Catherine; Martin for MCing; For food donations, Basel from Jerusalem Restaurant, Ibrahim from The Silk Road Cafe, Adnan from Umi Falafel along with Widad, Fatin, Sue and Martin; Paul from Catsmelodjan Graphic Art for the wonderful poster image; Annemarie Jacir of Filistine Films and Bill Sich at Verve Pictures; and the Deeb family at GP Digital – another Palestinian-run business in Dublin – for printing. It’s thanks to networks of volunteers and supporters like these that we can put on great events such as this. Some of the food! (Pic: Fatin Al Tamimi) Some of the crowd downstairs (Pic: Fatin Al Tamimi) Some of the crowd upstairs (before it got ridiculously full!) (Pic: Fatin Al Tamimi) The poster for Palestinian Culture Night. (Image by Paul Kirby.)