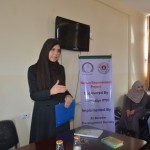 A project in the Khan Younis area of Gaza, directly supported by the Portadown branch of the Ireland Palestine Solidarity Campaign (IPSC), will see training and employment opportunities created for at least sixty women in war-devastated region.

In the aftermath of last year’s military onslaught on Gaza by Israeli forces which cost the lives of over 2,000 Palestinians, a number of people in Portadown who had previously been involved in various initiatives relating to Palestine came together to form a local branch of the Ireland Palestinian Solidarity Campaign. That decision to form an IPSC branch has permitted people in the Portadown area to become more pro-active on the whole Palestinian issue on a long-term basis.

As well as engaging in the usual solidarity activities – white-line pickets, public meetings, film screenings, information stalls, etc. – IPSC members in Portadown also made contact with community workers in Khan Younis to see how they could provide assistance to those most affected by the conflict.

A proposal was received back from Gaza in relation to a potential project which sought to provide direct assistance to women in those families where the main bread-winner was either killed or seriously injured as a result of the Israeli bombardment.

That initiative proposed the provision of training and employment opportunities to women by creating a small, co-operatively-based food-processing unit where various baked foods, jams, etc., could be produced thereby empowering some of those most affected by the conflict and, at the same time, providing them with a source of income.

Although small, the value of this and other similar projects in Palestine should not be under-estimated. UNRWA, the UN agency for Palestine refugees, reported last week that 13,167 refugee families in Gaza remain displaced because of the damage done to their homes by Israel’s 2014 attack.

Just a few months ago, a report by the World Bank showed that 43% of Gaza’s 1.8 million population are unemployed, with youth unemployment reaching levels of about 60%.

Steen Lau Jorgensen, World Bank country director for the West Bank and Gaza said in May this year, “Gaza’s unemployment and poverty figures are very troubling and the economic outlook is worrying. The current market in Gaza is not able to offer jobs, leaving a large population in despair, particularly the youth.”

The massive destruction which Israeli forces wreaked upon the Khan Younis area, coupled with the interference which the Portadown IPSC experienced in sending funds to Gaza as a result of Israeli’s ongoing economic blockade, hindered the commencement of the women’s project for many months.

However, in recent times, the project is now on track. A progress report provided this month to the Portadown IPSC by the El-Baraem Development Society gives details of several public meetings held in Khan Younis to inform local women about the project. Over 100 women expressed firm interest in the project and sixty of those, aged between 25 and 45, have now been formally recruited. A training programme has been developed which will commence in the next few weeks. Premises in which to locate the project have also been identified.

The next stage in the project will be securing equipment for the initiative for which funds are still required.

Widyan Sha’at is the Palestinian woman co-ordinating the project in Gaza. She said, “Through this project, supported by Portadown IPSC, we are giving hope to poor families and to those widowed in the conflict by helping women to be productive and at the same time providing help to their communities by playing an active role in the creation of training and employment for them.”

Widyan continued, “This project is also important for Palestinians as it is about moving away from dependency on charitable aid towards self-empowerment, confidence-building, emancipation and self-sufficiency.”

Speaking about the project, the chairperson of the Portadown IPSC branch, Ciarán Ó Fearghail, said, “It’s good to see that this project is finally coming to fruition. We ‘adopted’ the women’s empowerment project locally as a means by which people in Portadown and surrounding areas could provide some form of positive and long-lasting aid to the Palestinian people.

“Since last year, we have raised several thousand pounds to help this initiative get off the ground. Local people have been fantastic in their response. It speaks volumes about the generosity of people within our community and the strength of their solidarity and empathy with the plight of the Palestinian people.

Ciarán added, “The aims of the Ireland Palestine Solidarity Campaign are to raise awareness in Ireland of the illegal occupation of Palestinian land, the plight of Palestinian refugees and the struggle of Palestinian citizens for full equality and civil rights. Those aims also include fostering links between the Palestinian and Irish people in the areas of health, education, culture, workers’ rights, the economy, and the promotion of human and civil rights.

“Our support for the El-Baraem Women’s Empowerment Project is an example of one way of translating those aims into positive and affirmative actions.

“I’d also like to take this opportunity to remind people that we also have an upcoming fund-raiser in the Tunnel Bar in Portadown on Friday 6th November with a traditional music session and story-telling night and I would encourage people to support that event.

“As events in the West Bank, Jerusalem and Gaza have again shown in recent weeks, Palestine is still an issue that should not be forgotten about.” Widyan Sha’at addressing one of the meetings in Khan Younis Women from Khan Younis at one of the information meetings.