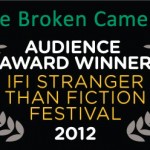 The acclaimed documentary film about the nonviolent resistance movement to Israel’s apartheid wall and settlements in the Palestinian village of Bil’in, Five Broken Cameras, has notched up another award – this time as part of the Irish Film Institute’s ‘Stranger Than Fiction’ documentary film festival. The film by Emad Burnat and Guy Davidi, won the Audience Award – meaning it was voted by film-goers as the best film in the festival.

Several IPSC members and supporters went along to the screening in Dublin on Friday 17th August and can confirm that the film is a deserving winner of this year’s award.

The IPSC also handed out leaflets after the screening encouraging people who felt moved by the film to get involved in Palestine solidarity work. Click here to read the leaflet (PDF).

The IPSC congratulates the film-mkaers and the people of Bil’in on winning this small, but significant, award.