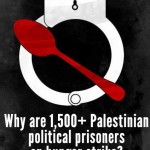 Why are 1,500 Palestinian political prisoners on hunger strike?

On Monday 17th April – Palestinian Prisoners’ Day – around 1,500 Palestinian political prisoners in Apartheid Israel’s jails began what they call the Freedom & Dignity Hunger Strike. The primary reasons the prisoners are on hunger strike is to secure more frequent and lengthy family visits, better prison conditions such as improved medical care, and an end to the practice of solitary confinement and Administrative Detention (internment without charge or trial).

How many Palestinian political prisoners does Israel hold?

At present there are over 6,300 Palestinian political prisoners in Israel’s jails. 300 of these are children, 61 are women, 13 are members of the Palestinian parliament (including two of the hunger strike’s leaders Marwan Barghouthi and Ahmad Sa’adat).

Internment and Military Courts: What does the Israeli ‘justice’ system look like?

Israel uses two methods to imprison Palestinians. The first is a method called Administrative Detention, which is a form of indefinite internment without charge, trial or being able to see or challenge any alleged evidence against prisoner.  There are around 500 prisoners (nearly 10% of the prison population) currently detained in this manner. Amnesty International says Israel uses Administrative Detention “to lock up Palestinian activists without charge or trial”. As Amnesty notes, these detention orders can be repeatedly renewed, “so in effect detainees can be held indefinitely. The process violates their right to a fair trial which is guaranteed by international law”.

While Administrative Detention is technically permissible under international law, it is only supposed to be used in but only as an exceptional measure in extreme cases.  Israel’s routine use of AD can thus only be seen as an illegal measure, and indeed the practice has been criticized by the UN, the EU and human rights organizations.

But aren’t there convicted prisoners too?

However, Administrative Detention is only one aspect of the larger prison regime used by Israel to suppress Palestinian resistance to occupation and Apartheid. The vast majority of political prisoners are ‘convicted’ by non-jury Military Courts, which have a 99.7% conviction rate, in ‘trials’ that last on average 10 minutes.

According to Amnesty International, in these courts, which are biased from the outset, “proceedings do not meet international standards for fair trial”. As Amnesty points out, Palestinians “continue to face a wide range of abuses of their right to a fair trial. They are routinely interrogated without a lawyer and, although they are civilians, are tried before military not ordinary courts”.

Furthermore, Amnesty states that “consistent allegations of torture and other ill-treatment, including of children, were frequently reported. Among the most commonly cited methods were beatings, threats to the detainee or their family, sleep deprivation, and being subjected to painful stress positions for long periods. Confessions allegedly obtained under duress were accepted as evidence”.

It is worth noting that Palestinians in the Occupied Territories are subject to Israeli military law, while Israel’s illegal settlers are governed by Israeli civil law – a clear example of Israel’s Apartheid system in action. As the Israeli human rights organisation B’Tselem notes, Palestinians are tried by “soldiers in uniform enforcing martial law on the civilian Palestinian population living under military rule. The people who take part in administering the occupation are on one side, while the regime’s subjects are on the other. Military courts are not an impartial, neutral arbitrator. They are firmly entrenched on one side of this unequal balance.”

Finally, Amnesty notes that “the overwhelming majority of cases before Israeli military courts are decided in plea bargain, an indication that both defendants and lawyers feel that they have little hope of obtaining a fair trial.” In essence, the quickest way to be released from prison is actually to not contest the charges to avoid an even harsher sentence, and thus a longer time in prison.

In short, for the reasons outlined above, all convictions in the Israeli Military Court system should be seen as invalid as they do not meet international standards required for a fair trial, and torture and threats are used to obtain confessions or convictions via plea bargains. Yet even the Israeli Prison Service itself concedes that, of these alleged ‘security’ prisoners, only around half are alleged to have been directly involved in armed activities; it is furthermore worth noting that armed attacks on occupation military forces are legal under international law, so those alleged to have been involved in political violence targeting civilians are an even smaller number again.

Is it true that Israel locks up children?

According to Defence for Children International Palestine, every year the Israeli military arrests and prosecutes around 700 Palestinian children in its military court system. “From the moment of arrest, Palestinian children encounter ill-treatment and torture at the hands of Israeli forces. Three out of four experience physical violence during arrest or interrogation. Israel is the only country in the world to automatically prosecute children in military courts that lack basic safeguards for a fair trial.” Ill-treatment in the Israeli military detention system remains “widespread, systematic, and institutionalized throughout the process,” according to the UNICEF.

Human Rights Watch says that “Palestinian children are treated in ways that would terrify and traumatize an adult. Screams, threats, and beatings are no way for the police to treat a child or to get accurate information from them.”

UNICEF further states that “although many children reported providing confessions as a result of ill-treatment, few raise this matter before the court for fear that their complaints would lead to harsher sentences, even though international law prohibits the use of evidence obtained under duress by a court. Ultimately, almost all children plead guilty in order to reduce the length of their pre- trial detention. Pleading guilty is the quickest way to be released. In short, the system does not allow children to defend themselves.

Two of the three prisons run by the Israel Prison Service, where the majority of Palestinian children serve their sentences, are located inside Israel. The transfer of Palestinian children to prisons inside Israel contravenes article 76 of the Fourth Geneva Convention. In practical terms, this makes family visits difficult, and in some cases impossible, due to regulations that restrict Palestinians with West Bank ID cards from travelling inside Israel and to the length of time it takes to issue a permit. This contravenes article 37(c) of the Convention on the Rights of the Child, which states that a child “shall have the right to maintain contact with his or her family through correspondence and visits, save in exceptional circumstances”

But Israel says the conditions in its jails are wonderful…

According to Addameer, one of the “key demands of the hunger strikers is an end to the use of solitary confinement in Israeli prisons and detention centres. The use of long-term solitary confinement is widely understood to be a form of cruel, inhuman or degrading treatment that may amount to torture. The Israeli prison service has practiced the policy of isolation against the prisoners and detainees, as well as detention in secret prisons since 1967. The prison service exercises the policy of isolation as a punitive measure and it is based on the recommendation of the occupation intelligence services. Prisoners have suffered from permanent psychological harm due to Israeli government reliance on isolating Palestinian prisoners from meaningful human contact with their fellow prisoners.”

“An additional major component of the hunger strike”, states Addameer, “addresses the denial of family visits to Palestinian prisoners, and the unlawful, inhumane and lengthy transfer process of prisoners. There are 17 prisons, four interrogation centres, and four detention centres. All but one of the prisons are located inside Israel, in direct contravention of Article 76 of the Fourth Geneva Convention, which states that an Occupying Power must detain residents of occupied territory in prisons inside the occupied territory. Thus, it is extremely difficult for family members to get permission to visit their loved one. Regular family visits are one of the many rights Palestinian political prisoners have been denied to have, so prisoners are asking to increase the length of family visits from 45 to 90 minutes. Imprisonment causes a huge amount of suffering and hardship, not only for those denied of their liberty, but for their relatives on the outside. Whole families and generations have grown up with no mother or father or brother or sister. The Israeli policy of mass detention and imprisonment has been devastating for Palestinian society, with families of prisoners being the silent victims.”

In addition, hunger-striking prisoners demand improved medical treatment and access to specialized care; access to media, including books, clothing, and food from family members; restoring educational access to distance learning; and the installation of public pay telephones for family calls in each prison.

What has been Israel’s response to the hunger strike?

Addameer says that, as a result of the hunger strike, Palestinian prisoners have been subjected to violent and coercive measures and policies by Israeli Prison Service and special units to push prisoners and detainees to end their hunger strikes. Prisoners have all been punished for their hunger strikes by being placed in solitary confinement and denied family and attorney visits, in an attempt to isolate them from the outside world; denial of recreational time; denial of access to the prison store; prohibition from participating in group prayers on Fridays; and seizure of salt. More troubling, the IPS has made it exceedingly difficult for independent doctors to visit the hunger striking prisoners and has provided prisoners with plastic cups in order to drink from the tap rather than the usually provided drinking water.

Additionally, all of the hunger-striking prisoners have been stripped of their possessions; only one blanket has been kept for each prisoner and one set of clothing in addition to the prison uniform. Hunger-striking prisoners were not given appropriate medical examination; only weight and blood pressure of the strikers were examined.  The alarmingly deteriorating situation in human rights of Palestinian political prisoners, compounded with widespread and systematic torture and ill-treatment, and lack of accountability and investigations for crimes by occupation forces, underlines the need for continued efforts towards a situation in which Palestinian prisoners are afforded fundamental and inherent human rights, and towards an end to a protracted and brutal occupation.

What steps can the Irish government take to help?

In Ireland of all countries, we understand the dangers inherent in any hunger strike, and the desperation that leads any individual or group to embark on such a life-threatening course of action in order to secure justice. The Irish government must intervene immediately with the Israeli government to ensure that the prisoners’ demands are met immediately so that their lives are taken out of danger. If Israel is not willing to listen and adhere to such interventions, then the Irish government must move to take concrete actions to sanction Israel.

Ultimately, the imprisonment of Palestinian political prisoners can been as an allegory of the greater issues at play: every Palestinian – whether in the occupied territories, inside the state of Israel or in the refugee diaspora – is a prisoner of Israeli Apartheid and settler colonialism.

And while the issue of prisoners, particularly child prisoners, is one that is often overlooked in discussions around the Palestine-Israel issue, usually only mentioned when Israel releases prisoners as a so-called ‘goodwill gesture’, it goes to the very heart of Israeli policy in Palestine – the decapitation of political movements, the criminalisation and ‘securitisation’ of young people who resist occupation, not to mention the psychological and traumatic effects detention and abuse has on young people who go through the prison system.

The demands of the hunger striking prisoners notwithstanding, it is our belief that: