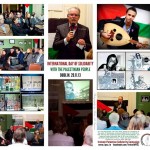 To mark International Day of Solidarity with the Palestinian People, on Friday 29th November the Ireland-Palestine Solidarity Campaign was proud to host a unique evening exploring how Palestinians and internationals use art as a method of both cultural and political resistance to Israeli occupation, apartheid and colonialism.

The event took place in the Pearse Centre, an historic dublin building which was the birthplace of Padraig and Willie Pearse, two Irish revolutionaries who were executed by the British military for their part in the 1916 Easter Rising. By 7.15 the venue was full to capacity and, unfortunately, we had to begin turning people away due to the lack of space. Those of us who were there we about to become privy to an amazing night.

The evening’s brilliant host was Robert Ballagh, one of Ireland’s leading artists, who has created a number of works with a theme around solidarity with Palestine and used them to raise money for the Irish Ship To Gaza Campaign, amongst others.

The evening began with some beautiful oud music courtesy of local young Palestinian musician Kifah Ajamiah. Then the first to speak were Matin O’Quigley and Fatin Al Tamimi, Chairperson and National Committee member of the IPSC respectively, who talked about the importance of the 29th November for Palestinians globally and given that evening was also the 12th birthday of the IPSC, also about our work over those years. We were then joined via a video link up from the Middle East by Khalid Al Ali, the son of artist Naji Al Ali, who spoke eloquently about his father’s life, work and ideals. Using his cartoons as the medium of exploration, we learned of Naji’s attitude toward Israel, the Arab states, the Palestinian people and the Palestinian leadership, human rights, the role of oil and of course, about his most famous and enduring creation, the 10-year-old refugee child Handala.

Twenty-four of Naji Al Ali’s (c.1936-1987) drawings were exhibited on the walls exploring these themes. They revealed Al Ali as a tribune of Palestinian people, especially the refugees, of which he himself was one. His work expressed the hopes, fears and frustrations of not just Palestinians, but the Arab masses as well. The Guardian once suggested that Al Ali was “the nearest thing there is to an Arab public opinion”.

In particular, Al-Ali created cartoons that depict the complexities of the plight of the Palestinians. These cartoons are still relevant today – indeed, many of them are so prescient they could be about events today rather than 30 or 40 years ago – and Handala, the refugee child who is present in almost every cartoon, remains a potent and omnipresent symbol of the struggle of the Palestinian people for freedom, justice, equality and self-determination. Naji Al Ali, who was assassinated in 1987 in a murder than remains unsolved,  lives on through his work – and others’ adaptations of this work; today Handala can spotted everywhere from necklaces and t-shirts, to frequent appearances on the Israeli separation wall in Palestine.

This latter point was illustrated by our next speaker, William Parry, who spoke to us via video link from London (being unable to make it in person due to personal reasons). William’s lecture maintained the evening’s our focus on art as a form of resistance and he discussed street art and graffiti in Palestine. He said that the presence of Israel’s illegal separation wall in many West Bank communities has given Palestinian and international artists access to what is, in effect, the world’s largest canvas. This canvas is used to convey messages of  resistance and solidarity. Like the work of Naji Al Ali, the writing on the wall can be a barometer both of Palestinian public opinion, and of how the Israeli occupation is viewed internationally.

In 2010 Parry produced the book ‘Against the Wall: The Art of Resistance in Palestine’ which, alongside Palestinians, featured the work of renowned artists like Banksy, Ron English, and Blu. In October 2013 Parry again returned to the West Bank, bringing the acclaimed graffiti muralists How&Nosm along with him. Parry, who is also communications officer with Medical Aid for Palestine, talked not only about his trips and experiences, but also about the intersection of art, resistance, solidarity… and hope.

Following the speakers, Kifah Ajamiah once again returned to the stage and played some more traditional Paletsinian songs while people explored the exhibition, mingled and, of course, enjoyed refreshments and the absolutely delicious food prepared by Fatin Al Tamimi.

Every November 29th the Ireland-Palestine Solidarity Campaign organises an event to commemorate the UN’s International Day of Solidarity With the Palestinian People.  Similar events occur all around world, and we are proud to be a part of the global movement of solidarity with the Palestinian people’s collective struggle for their human, national and democratic rights.

The IPSC would like to extend our thanks to everyone who took part in the evening; our speakers Khalid and William, our host Robert, our musician Kifah, our cooks Fatin, Martin and Sue, our workers on the night Jennifer, Frankie and Hassan, and the person whose vision brought the whole evening together, Angela.  And of course, all those who came along and made it a very special evening.