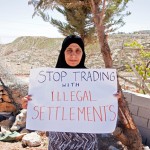 The Ireland-Palestine Solidarity Campaign sent the following letter to the Minister for Foreign Affairs and Trade regarding the implementation of EU guidelines on labelling of products from illegal Israeli settlements in the occupied Palestinian territories.

EU guidelines on labelling of illegal settlement goods must be rigorously enforced, but they are not enough for EU to meet its obligations under international law.

I am writing to you on behalf of the Ireland-Palestine Solidarity Campaign (IPSC).

As you may be aware on the 11th of November 2015 the European Commission adopted an interpretative notice on the indication of origin of goods from the territories occupied by Israel since June 1967. The European Union, in line with international law, does not recognise Israel’s sovereignty over the territories occupied by Israel since June 1967, namely the Golan Heights, the Gaza Strip and the West Bank, including East Jerusalem, and does not consider them to be part of Israel’s territory, irrespective of their legal status under domestic Israeli law.

The purpose of the interpretive notice is to clarify specific elements related to labelling of food products legislation. The interpretative notice recalls that when the indication of origin is mandatory, i.e. explicitly required by the relevant provisions of EU law, it must be correct and not misleading. This applies to products such as fruit and vegetables. However, even if the labelling of a product’s origins is voluntary it must not mislead the consumer. The interpretative notice also recalls that, in any case, in accordance with EU consumer protection legislation, indication of origin becomes mandatory when the omission of that information would mislead the consumer as to the true origin of the product or when such omission causes or is likely to cause the average consumer to take a transactional decision that he/she would not have taken otherwise. It is the responsibility of the Irish Government to implement this.

The EU legislation on indication of origin is very clear: “Made in Israel” used for the products coming from illegal Israeli settlements would mislead the consumer and therefore is inconsistent with existing EU legislation. The implementation of these rules will remain in the hands of national enforcement authorities and thus we call on the Irish Government to ensure that the new labelling regime is strictly enforced and adhered to within Ireland so that conscientious consumers are not mislead.

This interpretative notice means that the EU is moving, albeit slowly, in the right direction in order to adhere to its obligations under its own, and international, law. While the IPSC welcomes this action from the EU Commission we feel that more should be done. While putting specific labels on products is a form of progress in this regard, we would stress that these settlements are illegal under international law, which continues to be violated on a daily basis by Israel, and thus should be banned from entering the EU outright. This is not a radical proposition, but rather a statement of obligation.

The Irish government, as with all EU member states, must – in the words of the Palestinian Boycott, Divestment and Sanctions National Committee (BNC), the broadest coalition of Palestinian civil society, trade union, faith, artistic and political organisations – “meet its obligations not to provide assistance to Israeli violations of international law. It can begin to do this by banning all trade with companies that operate within or provide services to illegal Israeli settlements, ending EU subsidies to Israeli military companies and stopping all arms trade with Israel.”

However, labelling alone is far from enough to bring pressure to bear on Israel’s illegal settlement enterprise. For example, it would be unthinkable in Ireland to allow someone to produce and sell items while violating domestic law and to only ask that they label their products in relation to their origins, i.e., their production is a result of illegal acts. It should also be unacceptable for Israeli entities to be allowed to do essentially the same thing.

If you have any questions on the subject do not hesitate to contact us. It is our sincere hope that the Irish government you will support the implementation of legal obligations on matters outlined above.