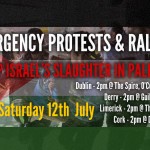 As the death toll in Israel’s latest onslaught on Gaza reaches 121, several actions have been called around Ireland taking place this Saturday. It’s important that as many people as possible turn out to show their solidarity with the Palestinians people under attack, their opposition to this latest round of brutal attacks on Gaza, and their anger at political inaction and media misreporting of the issue.

The majority of casualties have bee civilians according to the Palestinian Center for Human Rights. Amongst the dead are at least twenty one children, the youngest of which was just eighteen months old. Two of Israel’s deadliest attacks targeted two family homes in Gaza killing eight people on each occasion. The deliberate targeting of a civilian population amounts to collective punishment and is illegal under international law.

Prior to the escalation of the assault on Gaza, attacks had also been taking place in the West Bank and Gaza where at least 12 people were killed and at least 600 detained by Israeli occupation forces. Some two hundred of these remain in custody without charge.

IPSC Media Spokesperson Freda Hughes said, “We condemn the actions of the Israeli state which are disproportionate and amount to collective punishment of a captive population. The impunity which the international community consistently bestows upon the Israeli state ensures many more innocent Palestinian lives will be lost. The Irish government must demand that Israel be suspended from the Euro-Med Agreement until it complies with international law and respects human rights, as it is obliged to under Article 2 of that agreement. The Irish government should also join the chorus of voices from international civil society demanding an arms embargo on the Israeli state.”

Ms Hughes continued, “We urge the Irish government and the EU to work to pressure Israel to both immediately cease its bombing and aggression against the Palestinian people of Gaza, and to work towards a ceasefire agreement with Palestinian armed groups.”

The IPSC is also calling on people to make sure they always boycott Israeli goods, from herbs to blood diamonds; to contact media outlets and complain about any biased coverage that de-humanises Palestinians and/or parrots Israeli state narratives;  and to contact government politicians and let them know Irish government inaction and EU support for Israel is unacceptable.