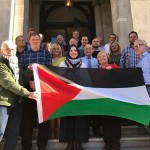 “We in the Ireland Palestine Solidarity Campaign sincerely thank Dublin City and Sligo County Councils for voting for these important symbolic measures. They are  in the words of the motions themselves, heartening ‘gestures of solidarity with the people of Palestine living under occupation in the West Bank and Gaza, with the Palestinian citizens of Israel denied basic democratic rights and with the over 7 million displaced Palestinians denied the right of return to their homeland’. I’m sure I am echoing the views of all Palestinians in Ireland in saying that these gestures have been truly soul-stirring and deeply emotional on a personal level.”

“In relation to Dublin, the Irish capital is a city that welcomed me when I first arrived here to start a new life, and I am so proud and honoured that my adoptive city will fly the flag of my homeland, Palestine, in an amazing act of solidarity with my people. We Palestinian Dubs will hold our head high knowing that the people of Dublin support our struggle for justice and self-determination.

“Finally,  we would like to especially thank Cllrs. John Lyons and Mannix Flynn for proposing and seconding the Dublin motion, Cllrs. Declan Bree, Chris McManus and Gino O’Boyle for proposing the Sligo motion, and all those Councillors who spoke and voted in favour of these historic actions, and who stood up for Palestinian rights!”

[1]: The full text of the Dublin motion [the Sligo motion is almost the same] reads: “Noting recent reports of diplomatic developments by the Irish state toward full recognition of the state of Palestine, aware also that Ireland accorded the Palestinian delegation in Dublin diplomatic status in 2014, the same year that witnessed both Houses of the Oireachtas pass motions  in support of Palestinian statehood, this city council will fly the flag of Palestine over City Hall for the month of May 2017 in support of the above diplomatic moves and as a gesture of our solidarity with the people of Palestine living under occupation in the West Bank and Gaza, with the Palestinian citizens of Israel denied basic democratic rights and with the over 7 million displaced Palestinians denied the right of return to their homeland.” – Proposed by Cllr. John Lyons, 30/03/17