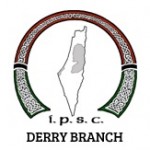 The VOID Gallery’s exhibition ‘Nothing But Longing’ opening Saturday 14th January 2017, curated by Sagit Mezamer showcases the art of Israeli artists who participated in a year long residency in Cushendall organised by Bill Drummond. This project was not supported by funding from the State of Israel and all the artists in the exhibition condemn the occupation of Palestine by Israel.

The global Boycott Divestment Sanctions (BDS) movement is growing and the motion by the Derry City and Strabane District Council to support BDS, has added Derry and Strabane to the growing list of municipalities internationally who are taking a stand against Israeli apartheid.

Additionally, the recent UN security council’s resolution calling for the immediate cessation of Israeli settlements in Palestine’s occupied West Bank and East Jerusalem, proves that the movement against Israeli apartheid is growing. More people globally rightly see Israel as an oppressive, colonial state that denies Palestinians of their human rights.

The IPSC is part of the global BDS movement and as part adheres to the cultural boycott of Israel. The cultural boycott was called for by Palestinians in response to the active involvement of Israeli cultural institutions in maintaining and whitewashing Israel’s occupation, colonisation and apartheid. The call urges individuals and organisations to boycott Israeli cultural institutions, and urges artists to refuse to perform in Israel. BDS targets institutional complicity with the Israeli state, not Israeli nationality or Israeli individuals.

One of the key areas of concern for the cultural boycott of Israel is the “Brand Israel” campaign, conceived by the apartheid state as a means of rebranding itself as a centre of global innovation, art and culture. This attempt to normalise and whitewash Israel’s record of colonial occupation, ethnic cleansing, apartheid and war crimes is a major focus of the Israeli state and projecting Israeli products internationally is part of this. For this reason, it is extremely significant that the VOID recognised the importance of not hosting an exhibition sponsored in any way by the Israeli state.

Unfortunately, a main funder of this exhibition, the US organisation Artis, has a less clear position on ‘Brand Israel’. It is an independent organisation that funds individual Israeli artists. While Artis has formally written a statement endorsing BDS, its actions do not adhere to all of the BDS principles, specifically in relation to the cultural boycott.

The Palestinian Campaign for a Cultural and Academic Boycott of Israel (PACBI), the global leadership of the cultural boyoctt campaign, have confirmed to us that: “Artis is boycottable. While it does not receive any state funding from Israel, its entire raison d’etre is to promote Israeli art and, as a result, ‘Brand Israel’.” PACBI explained that Artis also sends international arts figures to Israel to encourage relations not just with Israeli artists but, crucially, from the perspective of the BDS campaign, also with Israeli arts institutions. PACBI continued that this position “violates the applicable cultural boycott guidelines. Surely Artis must be boycotted by anyone who supports Palestinian rights or opposes Israel’s regime of oppression. Artis is a smart Israel branding institution that has evolved its tactics in the BDS age.”

For these reasons, international Palestine solidarity activists have protested Artis and called on the organisation to clarify its stance on BDS.

We are joining the call for Artis to fully comply with BDS. Until this happens, we believe Artis is not an organisation progressive institutions such as The Void should be engaging with.

Another key component of BDS is to understand that the relationship between Israeli and Palestinian is not one of two equal sides in a conflict over disputed territory. Israel is a colonial apartheid state that oppresses the Palestinian people and denies them their inalienable rights. BDS calls for co-resistance between the people of Israel and the people of Palestine, not so-called ‘co-existence’ which merely serves to elide the colonial relationship present between oppressor and oppressed. Dialogue and shared understandings alone do not tear down the walls of injustice and all attempts to see peace building through this paradigm only strengthen the oppressor by allowing the colonial status quo to be maintained.

Unfortunately, whatever his intentions, Bill Drummond’s project of bringing Israeli artists to the nationalist village of Cushandall appears to be an attempt to extract art and personal experience from the political structures of apartheid. Any attempt for dialogue outside the framework of resistance only hinders the building of an actual movement to dismantle Israeli apartheid. Only after apartheid is defeated, and the Palestinian people enjoy the freedom, justice and equality that they are fighting for, can Palestinians and Israelis truly begin dialogue on an equal basis.

Because of the international success of the BDS campaign, the Israeli Knesset passed a law in 2011 that states that an individual who supports BDS can face civil prosecution and allows Israeli state agencies to deny tax exemptions and state contracts to such individuals who publicise their support for BDS. Israel is not a democracy and does not allow freedom of speech for its citizens; it can be difficult, if not impossible, to be a vocal supporter of BDS from within Israel. Therefore, these Israeli artists should be congratulated for condemning the occupation of Palestine.

For this reason, Derry IPSC calls on those who choose to see the exhibition to remember that the artwork displayed should not in any way whitewash the atrocities of the Israeli state.