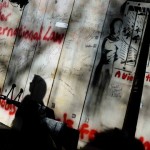 David Lloyd, the Distinguished Professor, poet, activist and signatory to both the Irish Academics’ and Irish Artists’ pledges to boycott Israel, has a wonderful piece entitled ‘The Malevolence of Occupation’ in the new issue of the Dublin Review of Books. Below is an excerpt, you can read the full piece here.

Above all, boycott is an instrument of civil society. We call for a boycott when the means to redress an ongoing injury are denied by the legal or political institutions that ought to intervene. In December 2009, Israel launched its catastrophic “Cast Lead” assault on Gaza ‑ as it would again in 2012 and 2014. Before it was over, Israel had killed some 1,400 Gazans, mostly civilians with nowhere to hide and no means of escape. At the height of this indiscriminate slaughter, the US House and Senate passed a resolution in support of Israel’s campaign that was mendacious in almost every clause, including blaming Hamas for this long-planned and disproportionate assault. Only four courageous representatives dissented. Given such lock-step support of Israel, even as the IDF was pursuing what the UN’s Goldstone report would later establish was a criminal and utterly asymmetrical war on an imprisoned population, it became apparent that American ‑ or European ‑ institutions would never hold Israel accountable without some countervailing pressure from grassroots social movements.

That’s why, in January 2009, a handful of US-based scholars launched the US Campaign for the Academic and Cultural Boycott of Israel. Boycott, as we understood it, was not simply an expression of our very lively disgust at Israel’s indiscriminate and overwhelming slaughter. It was, first and foremost, a response to the call from Palestinian civil society for boycott, divestment and sanctions on Israel (BDS), directed not to the powers that had consistently and for decades failed them, but to global civil society. We committed to helping shape a social movement that would breach the blockade on achieving justice for Palestinians that Israel and its well-funded lobbies had for generations maintained.