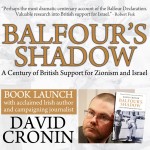 Between Monday 23rd and Saturday 28th October 2017 the Ireland-Palestine Solidarity Campaign is honoured to host Irish journalist David Cronin as he tours Ireland to launch his new book, ‘Balfour’s Shadow: A Century of British Support for Zionism and Israel’ (Pluto, 2017). Come along to one of the talks to hear from David – copies of the book will be available to buy at the event and the author will be happy to sign them after his talk.

Robert Fisk, journalist and author
“Perhaps the most dramatic centenary account of the Balfour Declaration …  Valuable research into British support for Israel.”