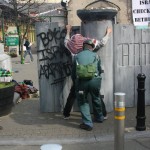 Luckily it was just part of a street theatre event organised by the Ireland Palestine Solidarity Campaign (IPSC) to highlight awareness of the day to day horrors being endured by the Palestinian people under Israeli occupation, and highlighting the role Irish cement multinational CRH plays in the building of Israel’s Apartheid Wall and illegal Jewish-only settlements in the West Bank.

To sign the IPSC’s petition calling on CRH to divest from their Israeli interests, please do so by going here.

Speaking afterwards, Wexford IPSC Rep Gerard Barron said:  “We have been staging the ‘Israeli Checkpoint Bethlehem’ street theatre event across the country to highlight the routine difficulties and restrictions on freedom of movement faced by people in the occupied Palestinian territories as they attempt to go about their daily lives.  We organised this event in Wexford today, to try and  give the people  an insight into what is the reality for ordinary Palestinians.

“Their  lives are even further complicated by the grid of checkpoints that they must pass through each day.  At these checkpoints, Palestinians are routinely humiliated, beaten and even killed.  This is the day to day horror that they must endure and that we have tried to bring to life in Wexford with this street theatre. “It is also necessary to highlight the role that an Irish multinational company is playing in the suffering of the Palestinian people.  Irish cement multinational CRH plc is profiteering in Palestine through the sale of cement used for the construction of the Apartheid Wall and the illegal settlements in the West Bank.  At a recent tribunal, leading human rights barrister Michael Mansfield concluded that the conduct of CRH in occupied Palestine was ‘morally reprehensible and exposes the company to legal liability for these violations.’  CRH are currently under investigation by the OECD for alleged complicity with Israel’s violations of international human rights law and international humanitarian law.” Even the dogs on the street know it's Apartheid