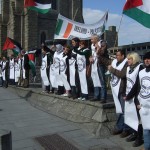 DUN LAOGHAIRE: On the morning of Wednesday 4th May 2011, over 50 human rights activists supporting the Ireland-Palestine Solidarity Campaign formed a ‘human wall’ outside the Annual General Meeting (AGM) of Irish multinational CRH, while concerned shareholders inside asked serious questions about the role of the cement company in the building of Israel’s illegal Separation Wall and illegal settlements in the Occupied Palestinian Territories.

CRH has a 25% stake in the Israeli Mashav group, which acts as a holding company for Israel’s sole cement producer, Nesher. Nesher provide up to 90% of all cement sold in Israel, including cement used in the construction of Israel’s illegal separation wall in Palestine, illegal settlements and checkpoints.

While activists staged a 50-strong human wall and mock Israeli checkpoint outside the gates of the Royal Marine Hotel where the AGM was being held, inside shareholders asked questions of the CRH Board of Directors.

During the discussion session, questions where asked by shareholders anxious about CRH’s complicity in human rights abuses in occupied Palestine and the potential legal ramifications arising from this collusion. The legal aspect was of particular relevance as yesterday the Ireland-Palestine Solidarity Campaign filed a complaint against CRH with the OECD accusing it of failing to comply with the human rights responsibilities of multinationals under OECD Guidelines. (The full text of the complaint is available here – http://tinyurl.com/5s8ryba)

The Board’s attention was also drawn to the recent findings of the Russell Tribunal on Palestine which found that CRH had potential legal liability for serious violations of international human rights law. The directors were asked on what basis the board could justify their reckless disregard for their shareholders interests given the very real risk of massive litigation by Palestinians displaced by the construction of the illegal Separation wall and settlements.

Finally, in response to CRH’s oft-repeated claim that they are merely a minority shareholder and have no involvement with the day-to-day running of their subsidiaries, it was pointed out that the company does not deny that it is involved with the strategic decisions being made by the subsidiaries. It was suggested that CRH’s ownership of a quarter shareholding in Mashav and the commonality of directorships is evident proof that CRH is fully aware of the actions of their subsidiaries. The questioner noted that votes taken by the Board of Mashav are taken with the full knowledge of these same CRH directors, and the Board was asked why “strategic decisions being made in relation to the sale of cement for the construction of settlements and Separation wall – which are illegal under international law – are not being seriously addressed by the company?”

Speaking after the AGM, IPSC Divestment Officer John Dorman explained that he was unhappy with CRH’s responses: “Unfortunately, CRH today gave us essentially the same unconvincing response as this time last year. They refused to engage with our questions in a serious manner, instead choosing to dodge them and fudge their answers. However we are sure that our continued highlighting of this complicity in grave human rights abuses and disregard for international law is forcing CRH to take note of the gravity of the situation.”

Mr Dorman concluded: “The IPSC is simply asking CRH to adhere with their corporate responsibilities to respect human rights within their sphere of influence, and we remain confident CRH will ultimately divest from its Israeli subsidiary in the interest of both their shareholders and the Palestinian people. The IPSC will certainly continue our campaigning on this extremely important issue.”