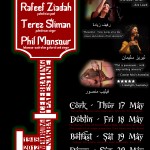 A major tour of Palestinian and Arab artists, with some local support, is to take place in Ireland between the 17th and 20th May, featuring cultural concerts in Cork, Dublin, Belfast and Derry. Billed as “Commemorating Al Nakba; Celebrating Palestine”, the tour will feature two renowned Palestinians, poet Rafeef Ziadah and singer Terez Sliman. Also joining them will be acclaimed Lebanese-Australian singer-songwriter Phil Mansour (Please  ‘Like’ the tour’s Facebook Page here for updates and info).

The tour will visit the following locations:

The tour will take place during what Palestinians call Nakba Week, which marks the 64th anniversary of the Palestinian Nakba (‘Catastrophe’) which saw the expulsion of over 700,000 Palestinians, forcibly uprooted from their homeland in order to facilitate the foundation of the State of Israel.

Poet Rafeef Ziadah, one of those on the bill, expressed her excitement: “This tour will be both a commemoration of the catastrophe that befell us Palestinians in 1948 and a celebration of the culture, creativity and continued resistance of the Palestinian people today; whether they reside in the 1967 or 1948 occupied territories, in refugee camps, or in the global diaspora. We are very excited about this tour and look forward to sharing our culture with Irish audiences.”

RAFEEF ZIADAH is a Palestinian refugee, poet, trade unionist and human rights activist currently based in London. She received an Ontario Arts Council Grant from the ‘Word of Mouth’ program to create her debut performance poetry album Hadeel. Rafeef’s performances of poems like ‘We Teach Life Sir’ and ‘Shades of Anger’ went viral online, garnering over a quarter of a million views between them. Rafeef has toured many countries, performing poetry and conducting educational workshops on the Boycott, Divestment and Sanctions campaign. Recently, Rafeef was chosen to represent Palestine at the Poetry Parnassus Festival at the South Bank Centre in London.
“Rafeef’s poetry demands to be heard. She is powerful, emotional, political. Please read her work and see her perform. You cannot then be indifferent to the Palestinian cause.” – Ken Loach

PHIL MONSOUR is an Arab-Australian singer songwriter with a history of producing music that travels beyond the mainstream to explore complex issues of identity, solidarity and politics. He is also a founder of the group ‘Artists Against Apartheid’. Phil’s songs speak with honesty and insight about people’s lives and personal experiences. His latest CD release Ghosts of Deir Yassin was written during a trip to Palestine, Jordan and Lebanon. Inspired by the courage of ordinary people fighting for freedom and justice from Palestine’s refugee camps, to Egypt’s Tahrir square, through to the Occupy movement, the lyrics are a fearless rally cry for action and solidarity. Phil will be showcasing his unique collection of rock songs and folk ballads, combined to capture both the alarm and optimism of current times.
“Phil is passionate… with amp-rattling intensity” – Courier Mail (Australia)
“Five stars” – Limelight (Australia)

TEREZ SLIMAN, a Palestinian citizen of Israel born in Haifa in 1985, is a singer who works in the field of “sound and movement.” She has participated in a variety of musical projects with local and international musicians. She has authored and composed music for two plays as well as recordings for children’s plays. Terez is influenced by many genres, but what makes her sound unique is the mix between traditional Oriental music, world music and Jazz. Her stage presence and incredible voice are completely captivating.
“Beautiful… Terez keeps alive the music and culture of her ancestors”