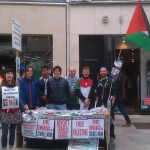 The petition calling for an end to the Irish arms trade with Israel has reached 5,000 signatures after five months – 2,000 online and another 3,000 physical signatures – that’s an average of 1,000 people signing up every month since the campaign was launched!

We’d like to thank you all for your support so far, it’s heartening to see such solidarity with the people of Palestine on display in the face of the indifference of Western governments, including our own here in Ireland.

The campaign has been successful thus far in raising awareness of the issue, and Irish government spokespeople – including the Minister for Defence – have had to make statements on the matter. However, they still refuse to discuss taking action to end this bilateral trade in death between Ireland and Israel.

Therefore, we ask you to redouble your efforts for Palestine. Please sign and share this petition on social media and invite your friends to sign. If everyone signs and recruits three people, we’ll be approaching 10,000 in no time!

If you want to take other actions, like writing to the government or sharing facts on social media, please see here for a list of things you can do.

Thanks for you time, continued support and solidarity.