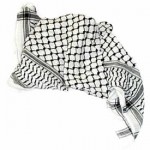 We’re happy to announce that the Black and White Keffiyeh scarves are now back in stock in the IPSC Online Store.

Traditionally worn by Palestinian peasants, the keffiyeh became a symbol of Palestinian nationalism during the Arab Revolt of the 1930s. Its prominence increased in the 1960s with the beginning of the Palestinian resistance movement, and in the late 1980s it became a potent symbol of resistance during the First Intifada.

Our keffiyehs were made in the last keffiyeh factory in Palestine, the Hirbawi Textile Factory, located in Hebron (Al-Khalil), and are available in both black and white and red and white patterns.

Watch an Al Jazeera documentary about the the Hirbawi factory by clicking here.