Audio: Report from the Irish Premiere of ‘Roadmap to Apartheid’ and discussion with ISM founders 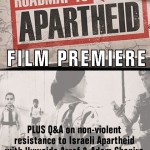 On Thursday 23rd February, as part of Israeli Apartheid Week 2012, the Ireland-Palestine Solidarity Campaign (IPSC) was proud to present the Irish Premiere of the brand new film ‘Roadmap to Apartheid’ by film-makers Ana Nogueira & Eron Davidson.

The 90 minute documentary film, takes a look at the current situation in Palestine through the lens of South African Apartheid; comparing the two regimes in a manner not flattering for the Israeli state. It is narrated by US Civil Rights icon Alice Walker, and features interviews with many Palestinian, Israeli, South African and international activists, journalists and academics. The film was well received by the audience of over 60 people, even receiving an ovation at the end. The film is due to be released in the coming months and will be making appearances (and hopefully winning deserved awards) at various international film festivals. You can view the film trailer below, and if you missed it don’t worry, the IPSC will be organising future screenings of this brilliant film around the country.

Following the film, there was a discussion with Huwaida Arraf and Adam Shapiro (audio recording below), two of the founders of the International Solidarity Movement (ISM) which promotes non-violent resistance to Israeli Apartheid. It was a wide ranging discussion that encompassed everything from Palestinian refugees to the ‘Arab Spring’.

Click here to download an audio recording of the Q&A with Adam Shapiro and Huwaida Arraf (mp3). Disclaimer: Views expressed in the discussion do not necessarily reflect the view of the IPSC. Adam Shapiro and Huwaida Arraf, two of the founders of the International Solidarity Movement (ISM) A section of the audience

Special thanks: The IPSC would like to thank the directors of Roadmap to Apartheid Ana and Eron for allowing us to screen their film as part of Israeli Apartheid Week 2012, and Huwaida and Adam for stepping in at the last minute when Iyad Burnat’s tour had to be cancelled.