Audio: How the EU aids the occupation of Palestine 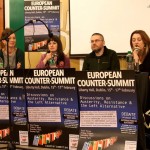 On Saturday 16th February 2013, a talk entitled ‘How the EU aids the occupation of Palestine’ was given as part of the EU Presidency Counter Summit in Dublin’s Liberty Hall. The speakers were David Cronin (journalist and author of Europe’s Alliance With Israel: Aiding the Occupation), Zoe Lawlor (Ireland-Palestine Solidarity Campaign, recently returned from a factfinding trip to Gaza) and Tanja Niemeier (Adviser on Trade for the European United Left) . It was chaired by Laura Fitzgerald of the Socialist Party.

Note: The Questions section has been removed as there was no microphone for the audience and most of the contributions were therefore inaudible.