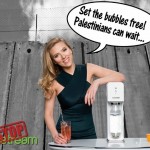 Scarlett Johansson has announced that she is resigning her role as Oxfam ambassador following a huge outcry over her role as the public face of a ad campaign by SodaStream, an Israeli company that based in an illegal Israeli settlement. Read more here.

Note: Below you can also still sign the petition calling on Ms. Johannson to drop her endorsement of occupation profiteers SodaStream.

On January 10, 2014, occupation profiteer SodaStream announced that Hollywood actress Scarlett Johansson had become their first-ever Global Brand Ambassador and will be starring in SodaStream’s Super Bowl ad on February 2.

Scarlett happens to be a Global Ambassador for Oxfam International, which considers settlements to be a major barrier to peace and contributor to poverty. Following international outcry, Oxfam stated that it was engaged in a dialogue with the actress. But on January 24, Scarlett released a statement whitewashing SodaStream’s complicity in Israel’s brutal military occupation and colonization of Palestinian lands and parroting SodaStream propaganda that the company is “building a bridge to peace between Israel and Palestine.”

More than 10,000 people have signed the international petition to Scarlett Johannson: Don’t Be the Face of Occupation. Add your name now!

Unlike Scarlett’s claim that SodaStream is “supporting neighbors working alongside each other” SodaStream is actually complicit in Israel’s brutal military occupation of Palestinian land by locating its factory in an illegal West Bank settlement where it exploits Palestinian land, labor, and resources.

Take action now to send the message that shilling for occupation and human rights abuses is unacceptable!

Sign the international petition urging Scarlett to take her responsibility as an Oxfam Global Ambassador seriously and end her relationship with SodaStream. Help us reach 10,000 signatures so we can deliver the petition to Scarlett’s agents in NY and LA this week!

CALL or WRITE to Oxfam Ireland and let them know that the global Oxfam organisation must dump Scarlett Johansson as an ambassador if she continues to defend occupation and settlements. Contact Oxfam Ireland here – or email info@oxfamireland.org or call (01) 672 7662 (south) or 028 9023 0220 (north).

Please urge Oxfam to uphold its values and principled position against settlements and to follow their own precedent. Please be polite and courteous in your emails, especially as the latest information we have is that resistance to dropping Ms. Johansson is coming from the US section of Oxfam, not the Irish or other international sections who have a good record of supporting Palestinian rights.

In October 2012, Oxfam Italy cut its ties with Paola Maugeri over her role as a SodaStream PR Ambassador. In 2009, Oxfam International cut ties with Sex and the City star Kristin Davis over her role as spokesperson for cosmetics company Ahava, another Israeli settlement manufacturer.

The Super Bowl is in less than one week so we need you to take action now!

Let’s score a touchdown for BDS!