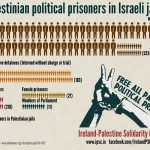 Today, Thursday April 17th is Palestinian Prisoners’ Day, and to mark the occasion the Ireland-Palestine Solidarity Campaign will be hosting two events in Dublin –

Since the beginning of the Israeli occupation of Palestinian territories in 1967, between around 800,000 Palestinians have been detained by the Israeli military. According to Amnesty, “many [have been] held incommunicado for prolonged periods”. This figure represents approximately 40% of the total male population in occupied Palestinian territory. At present, according to the latest available figures, there are over 5,200 Palestinian political prisoners in Israeli jails, including 183 internees, 11 parliamentarians, 21 women and 210 children. The issue of prisoners, particularly child prisoners, is one that is often overlooked in discussions around the Palestine-Israel issue. Yet the prisoners issue goes to the very heart of Israeli policy in Palestine – the decapitation of political movements, the criminalisation and ‘securitisation’ of young people who resist occupation, not to mention the psychological and traumatic effects detention and abuse has on young people who go through the prison system. Even NGOs who work with prisoners are targets of Israeli policy, with offices being raided and advocates themselves detained.

Israel practices two methods of detaining Palestinians – internment without trial (Administrative Detention) and ‘convictions’ in a non-jury military court system with a 99.7% conviction rate for Palestinians, “whose proceedings do not meet international standards for fair trial”, according to Amnesty. In addition, torture and ill treatment (of both children and adults) along with other violaitions of human rights and international law are frequent according to respected human rights organisations. The private security company G4S helps the Israeli government to run prisons at which Palestinian political prisoners are detained and often tortured or beaten. G4S is at the heart of this system, installing and running security systems at Israeli jails. Palestinian student Arafat Jaradat was tortured in the Al Jalameh interrogation centre in February 2013, where G4S installed and maintains the security systems. Seven days after his arrest, he was found dead in a cell in another prison that G4S helps to run. Jaradat is one of over 200 Palestinians who have lost their lives while in Israeli detention since 1967.

By working so directly in support of Israel’s prison system, G4S is complicit in Israel’s torture regime and its violations of the Geneva Convention, which prohibits the transfer of prisoners from occupied territory into the occupier’s territory. G4S also provides security for Ofer Military Court in the West Bank, the sole purpose of which is to imprison Palestinians, including hundreds of children and human rights defenders each year.

G4S is one of a number of private companies bidding for the lucrative JobPath contract with the Irish state. Awarding an Irish state contract to G4S, a company complicit in, and an accessory to, human rights abuses in the Israeli prison regime is something that shouldn’t be allowed to occur. We are therefore asking people to please send a letter to the Minister for Social Protection, Joan Burton TD, urging her reject the G4S tender. There is a sample letter at the following link: www.ipsc.ie/stopg4s

In June 2013, the Bill and Melinda Gates Foundation, the largest private foundation in the world, purchased shares in G4S worth $172m, making it one of the company’s biggest shareholders. The Gates Foundation says that it is “guided by the belief that every life has equal value” and that it uses its investments to fund projects that “help all people lead healthy, productive lives”. Yet by holding shares in G4S, the Bill and Melinda Gates Foundation is complicit in Israel’s detention without trial and torture of Palestinians. Ask them to divest by signing the petition at www.addameer.org/gatesdivest