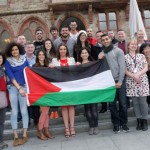 Local activists have expressed their anger after the UK immigration service denied visas to Palestinian athletes due to compete in Sunday’s Derry marathon.

Gaza-based Nader al Massri and Sami Nateel had been due to arrive in Derry on Friday but their plans have now been halted due to the visa refusal which the Irish Palestine Solidarity Campaign (I.P.S.C.) has branded “inexplicable”.

“We are hugely disappointed and angered at this decision. There was a large group of Palestinians who came to the Derry marathon last year and it was a massive success so we find it inexplicable that the immigration service would deny them the right to travel this year,” said Derry I.P.S.C. spokesperson Catherine Hutton.

“Like everyone who lives on the Gaza strip, Nader and Sami face huge restrictions every day of their lives due to the Israeli blockade. But it is highly ironic that, on this occasion at least, the Israelis were willing to allow them to travel to Derry but it is the UK authorities who have denied them entry.”

Meanwhile, Sinn Fein MLA Raymond McCartney has revealed that the deputy First Minister is calling on the immigration service to overturn the decision.

“Martin McGuinness’s office has been in contact with British Government officials today to protest at this decision,” he commented.

“We all remember the colour and joy which the Palestinians brought to the Derry marathon last year. They received a fantastic welcome which they hugely appreciated and the organisers deserve great credit for that and for inviting Nader and Sami to come over this year so it seems ludicrous to now say that their compatriots can’t make the same trip.

“Nader is someone who has represented his country at the Olympic Games in Beijing. He’s a previous winner of the Palestine marathon which, ironically, was established to highlight the restrictions on movement faced by Palestinians and here he is now being denied the right to travel to Derry.”

The ‘Journal’ has contacted the Home Office and is currently awaiting a response.

Orginally published on the Derry Journal.