An Attack on Palestinian Rights & BDS: IPSC Statement on the outrageous closure of bank accounts by Bank of Ireland 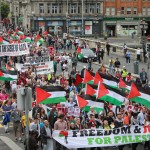 The Ireland-Palestine Solidarity Campaign (IPSC) was founded in 2001 by academics, journalists, trade unionists and human rights activists as an independent, non-party political NGO to advocate for Palestinian rights, as enshrined in International Law, which are denied them by the apartheid state of Israel.

In 2005, following the failure of the international community to act to secure an end to Israeli human rights and international law violations, Palestinian civil society issued a call for a global campaign of Boycott, Divestment and Sanctions (BDS) against Israel until it ends the occupation of Palestine, grants full equality to Palestinian citizens of Israel, and implements to the Right of Return for Palestinian refugees. The IPSC has consistently supported this call for peaceful action, and engaged in many BDS campaigns as a means of applying pressure on the Israeli state with the aim of securing freedom, justice and equality for the Palestinian people.

The IPSC is a fully legal civil society organisation, a CRO-registered non-profit company limited by guarantee, and a registered lobbying organisation with the Irish state. Its supporters and members include sitting and retired members of the Oireacthas, NI Assembly and British Parliament, municipal councillors, prominent Irish academics, human rights leaders, trade unionists, artists, sportspeople, legal specialists, and thousands upon thousands of people in Ireland who have supported our peaceful campaigns to build solidarity with the Palestinian people.

On 13th April 2008, current Uachtarán na hÉireann, Michael D. Higgins (then-TD and Patron of the IPSC) spoke at an IPSC event in remembrance of the 1948 Israeli massacre of Palestinians in Deir Yassin. In his speech he said:

“This demonstration is an opportunity to once again call on the State of Israel to cease its senseless, oppressive policies towards the people of Palestine … It is past time that the international community discharged its debt to the Palestinian people, who have waited too long for normality and peace to reign in their lives. The international community must assist in making this happen through solidarity, support and international law.”

This building of solidarity, support and recognition of Palestinian rights is what the IPSC has endeavoured to make happen during the past fifteen years.

Thus it came as a complete shock when the IPSC was informed in July that the Bank of Ireland – with whom we have banked since 2001 – would be closing our three bank accounts (two in the south and one in the north of Ireland) at the end of the September.

The background is that the bank first rang in early July, saying they wished to ask the IPSC “routine” questions as we were a “high risk” account, asking the questions below. When we demanded and got the questions in writing, we then discovered that the BOI Compliance Section was investigating us:

The questions asked (and answers provided) were:

Answering the questions thus, we also sent the bank a copy of our Constitution, which outlines the work we do, along with our fully audited accounts for 2015 showing the source of, and use we made of, all funds received.

However, later in the month, we were informed that our three accounts were to be closed on the 27th September 2016. We immediately wrote to the Bank asking for an extension until December, as August is a month when many people are away on holidays and we knew it would be difficult work making new banking arrangements, contacting our members and getting them to change their standing orders, etc in such a short space of time. Despite our having had an account with the Bank since 2001, this request was refused. (We have since opened an account with the AIB – details below – and are in the process of obtaining banking facilities in the north of Ireland).

On 27th September 2016 the Bank of Ireland officially closed the three accounts that the Ireland-Palestine Solidarity Campaign held with them. The BOI closed these accounts on two months’ notice without seeking to mediate with us in any way, despite the IPSC having banked with them for fifteen years. According to the final correspondence received from the BOI, they state that the accounts of the IPSC are “operating in, or [are] associated with, high risk countries, industries or activities” and that following a “due diligence review, which covered multiple risk factors” the IPSC’s accounts are “no longer consistent with the risk appetite of the Bank.”

Despite our enquires, the Bank has refused to tell us the reason why, after fifteen years, our perfectly legal and transparent activities for Palestinian rights are “no longer consistent with the [Bank’s] risk appetite”. The Bank has merely consistently quoted Article 10.2 of the Bank’s Business Account Terms and Conditions, which states that the “Bank may terminate this Agreement at any time on two months notice to the Customer”. The Kafkaesque nature of this rationale is astounding; it suggests that the reason the BOI is closing the IPSC accounts is because it can close the accounts. There has been no suggestion from the BOI of any wrongdoing on behalf of the IPSC. There has been no response to our queries seeking a specific rationale for the closure. Indeed, it should go without saying that had the Bank of Ireland any genuine concerns about our banking activities they could have approached us in a spirit of cooperation and transparency – not one of furtiveness, dismissal and opacity. Unusually, the Bank has also refused to speak to the media as to why it has closed our accounts or what pressure it may have been put under. The IPSC has no problem in speaking to the media on this issue, we have nothing to hide

The IPSC are now taking the case to the Financial Ombudsman and are exploring all possible means at our disposal, including legal action.

This denial of banking rights, the ensuing loss of income and the potential reputational damage to the IPSC comes in the context of similar seemingly coordinated attacks on Palestine solidarity organisations across Europe and the United States. Numerous bank accounts belonging to such organisations have been closed in France, Germany, Austria and the UK. It is difficult to escape the conclusion that this attack on the IPSC’s ability to bank – which is, in effect, the ability to function at all – is political in nature and forms part of this wider attack on organisations that advocate for peaceful action to secure Palestinian rights enshrined in international law. Israel has boasted of conducting a global campaign of ‘lawfare’ – using legal and other punitive threats to silence and attack supporters of Palestinian rights. This attack on the IPSC It appears to be part of this campaign, a politically motivated measure to silence a human rights organsiation that campaigns for Boycott, Divestment and Sanctions (BDS) against Israel until it fulfils its obligations under international law – a campaign the Irish government views as an entirely “legitimate” means of protest “intended to pressure Israel into ending the occupation.”

As the Boycott, Divestment and Sanctions (BDS) movement has grown exponentially worldwide, marking up many victories in the struggle for Palestinian rights against Israeli apartheid, Israeli officials, including government ministers, have repeatedly spoken of their intent to attack the BDS movement abroad, seeking to use its influence with allied governments to criminalise the non-violent campaign for Palestinian rights. The Israeli Minister in charge of its anti-BDS operation, Strategic Affairs Minister Gilad Erdan has openly spoken of making BDS activists “pay the price”, and said that Israel is attempting to get banks to shut down BDS groups’ accounts. Israeli Minister of Transport, Intelligence and Atomic Energy Yisrael Katz stated that Israel should engage in ‘targeted civil eliminations’ of BDS leaders with the help of Israeli intelligence. Amnesty International has condemned what it terms “threats and intimidation” by Israeli officials directed at the BDS movement. In light of these statements, we view this as a sinister move by Bank of Ireland suggesting interference by the Israeli state in the business affairs of a sovereign nation.

It is clear that Israel has lost the argument in the realm of public opinion, so it seeks to destroy the civil society movement via repressive anti-democratic backdoor means. This anti-BDS campaign is dangerous, not only for Palestinian rights, but for anyone who believes in free speech and the right to take action to pressure states, institutions or companies via boycotts, divestments or sanctions. Ireland – the country that gave the world the word ‘boycott’ – should be at the forefront of defending the right for civil society to engage in such justice-oriented actions.

Become a contributor and help us continue our vital work

We have done our best to contact everyone who previously generously paid a Standing Order to IPSC to give them details of our new account with AIB, but this was a laborious task and inevitably there were people we were unable to contact, and others that will fall through the cracks. Needless to say this whole process will have a serious negative financial effect on the IPSC and our ability to build solidarity with the people of Palestine’s struggle for freedom, justice and equality.

Thus, aside from letting the public know about this outrageous situation, we are also asking supporters to take out monthly subscriptions (or once-off donations) so that we can continue our work supporting the inalienable rights of the Palestinian people.

Finally we would ask people who have accounts with the Bank of Ireland, and who may be in a position to do so, to give thought and consideration to closing these accounts, and citing the Bank’s scandalous decision to close the IPSC accounts as the reason for doing so, and moving to another bank. If the Bank of Ireland finds that Palestinian rights do not meet their “risk appetite”, then perhaps people should ask themselves whether or not it is a good idea to risk your money with the Bank.

You can also donate online via PayPal here.