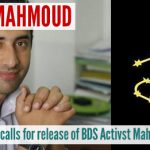 The Ireland-Palestine Solidarity Campaign (IPSC) today welcomed the news that Amnesty International has joined the calls for the immediate release of the Palestinian Human Rights Defender and General Coordinator of the BDS Movement, Mahmoud Nawajaa. Nawajaa was abducted from his home by Israeli occupation forces on 30th July and has been held without charge since, denied access to his lawyers or family.

IPSC Chairperson, Fatin Al Tamimi, said: “We thank Amnesty International for making this clear call for the immediate release of our colleague Mahmoud Nawajaa, who has been arbitrarily detained by the Apartheid state of Israel for being an effective and respected community leader, human rights defender and anti-occupation activist. Amnesty’s statement is doubly important because it places Mahmoud’s arrest in the wider context of Israel and its international allies’ increasing attacks on the BDS Movement – and we welcome their strong defence of the right to engage in BDS activism.

“However, we reiterate our concern that the Irish government has yet to call upon Israel to release Mr. Najawaa. As Amnesty has made clear he is a prisoner of conscience and the Irish government must join the chorus of voices like those of Front Line Defenders, the Irish Congress of Trade Unions, and now Amnesty International, who have condemned this arrest of a prominent human rights defender and BDS activist, and to protest forcefully to the Israeli authorities to secure Mr. Najawaa’s immediate release.”

Excerpts from the Amnesty International statement:

“Israeli authorities must immediately and unconditionally release Palestinian human rights defender Mahmoud Nawajaa, the General Coordinator of the Boycott, Divestment and Sanctions (BDS) movement in the Occupied Palestinian Territories (OPT) … He has been detained solely for exercising his rights to freedom of expression and association and is therefore a prisoner of conscience.”

“The international community as a whole has generally failed to take concrete action to pressure Israel to stop such practices. This has been interpreted by Israeli officials as a green light to continue them. The international community should make it clear that Israel’s attacks against human rights defenders and other voices who criticize Israel’s occupation will not be tolerated.”

“[Mr. Nawajaa’s is being held in] al-Jalama detention centre, in the city of Haifa in northern Israel, in violation of international humanitarian law, which prohibits the transfer of detainees from occupied territory into the territory of the occupying power. Mahmoud Nawajaa has been denied access to a lawyer or contact with his family since the arrest.”

“An escalation of acts of intimidation by the Israeli government has created an increasingly dangerous environment for human rights defenders and other voices who criticize Israel’s continuing military occupation.”

“Advocating for boycotts, divestment and sanctions (BDS) is a form of non-violent advocacy and of free expression that must be protected. Advocates of boycotts should be allowed to express their views freely and take forward their campaigns without harassment, threats of prosecution or criminalization, or other measures that violate the right to freedom of expression.”