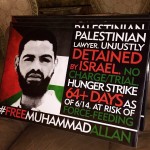 Addameer Prisoner Support and Human Rights Association today condemned yesterday’s  Israeli occupation High Court’s decision to suspend the administrative detention of Mohammad Allan. It did so as it believes the court’s decision condones arbitrary and administrative detention used by Israeli occupation forces in violation of the Fourth Geneva Convention. The High Court suspended Mohammad Allan’s administrative detention following his 64 days of hunger strike in which he reached a critical health condition. Medical examinations indicate Allan suffers from brain damage due to a sharp drop of Vitamin B1 levels in his brain as a result of the hunger strike.

In its decision, the High Court disregarded the systemic use of administrative detention in violation of Article 78 of the Fourth Geneva Convention which limits the detention of protected persons by the occupying power for imperative security reasons for limited time periods, and within procedural guarantees prescribed by the occupying power that must correspond with the provisions of the Fourth Geneva Convention. The court further failed to address the violations of the right to fair trial before an independent and impartial judiciary that administrative detainees face by military courts and their rights to procedural guarantees as stipulated under Article 75 of Additional Protocol I to the Geneva Conventions.

Addameer further holds that High Court’s decision allowed the Israeli occupation authorities and forces to evade their responsibility for the critical health condition of Allan. On one hand the court condoned the legality of the use of administrative detention and suggested its support for its use against Palestinian political prisoners. The court further approved the use of military courts and undisclosed secret material against Palestinian administrative detainees thus obstructing them of their right to a fair trial and their ability to produce an effective defense. The court on the other hand ignored the critical medical condition of Allan and the exceptionally high toll on his physical and mental health that he sacrificed to request the fundamental right of a fair trial. The court eventually decided to suspend Allan’s administrative detention thus leaving the space for the Israeli occupation forces to re-detain him once his medical condition improves.

Addameer closely follow the medical condition of Mohammad Allan who is still in a critical condition with grave concern. The High Court pointed out in its decision that the medical examinations held yesterday indicated brain damage, however the examinations did not specify how far reaching the damage is and whether it is permanent or reversible.

In closing, Addameer calls upon the high contracting parties of the four Geneva Conventions to take serious steps and positive actions to pressure the Israeli occupation authorities to respect its obligations as an occupying power towards Palestinians as stipulated under the Fourth Geneva Convention.