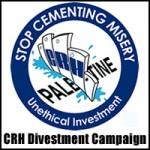 The Ireland-Palestine Solidarity Campaign is asking our supporters to wrote to the Irish multinational CRH to ask it to divest from it’s one-quarter ownership of Mashav, and Israeli holding company that owns Nesher cement, Israel’s sole cement manufacturer. Nesher cement is used in the construction of Israel’s illegal apartheid wall, checkpoints and settlements.

Recent media reports suggest that CRH is reviewing its investment in Mashav, along with several other investments. We urge you to write the new CEO, Mr. Albert Manifold, and ask that CRH finally acts in an ethical manner and drops its Israeli interest which is involved in aiding the commission of serious war crimes.

Furthermore, it has been reported that Nesher Cement is set to profit from the reconstruction of Gaza. We believe it would be simply obscene for CRH to profit further from the misery inflicted upon the people of Gaza by Israel.

Below is a sample letter which you can use a basis to send your own to CRH. It is always better to send a unique letter, so if you have time, please write your own.

Letters should be sent to mail@crh.com.

Subject: Re – Divestment from Mashav/Nesher in Israel

Israel’s most recent horrendous attack on Gaza left more than 2,100 dead and 11,000 injured along with a further 23 dead and 2,200 injured in the occupied West Bank. Having investments which support human rights abuses in Palestine is a toxic stain on CRH’s reputation.

Surely the time has come to seriously reconsider CRH’s investments in Israel from financial, ethical and moral perspectives? Between the financial loss arising from the company’s Israeli and Turkish investments and the cruel Israeli assault on the civilian population of Gaza, it would be a timely and significant decision.

Divestment from Mashav would be seen to be an ethical and principled move by the company to distance itself from the atrocities being carried out by Israel against the Palestinian people. CRH would be sending out a very strong signal that it is genuinely ‘committed to the highest standards of corporate governance’ and that it is fully committed to the UN supported frameworks and guidelines for transnational corporations with regard to business enterprises and Human Rights.

Across Europe an ever increasing number of companies are recognising that having investments in Israel is not good for business:

• Mounting International criticism against Veolia and G4S has impacted significantly on their global businesses. Both have announced their intention to withdraw from commercial activities in the occupied territories of Palestine.

• More than 17 European governments have now published guidance warning businesses about the economic, legal and reputational risks of economic ties with illegal Israeli settlements and state that firms should be aware of the possible abuses of the rights of individuals such transactions may contribute to.

• The Norwegian Pension Fund continues to divest from companies that continue to support Israel’s human rights abuses of the Palestinian people. Media reports now suggest that other European banks and pension funds are considering similar steps.

• The Presbyterian Church (USA) general assembly has voted to divest its holdings from three US corporations (Motorola, Caterpillar and HP) on the basis of their well-documented record of complicity in the oppression and denial of human rights of Palestinians. The United Methodists had previously divested from several companies including CRH plc.

As you will be aware, in May 2012 the Ireland-Palestine Solidarity Campaign presented CRH with a petition signed by more than 10,000 people requesting that CRH respect international law and divest from its operations in Israel. Surely the extreme brutality meted out by Israel against a defenceless civilian population is reason enough now for CRH to listen to this call from civil society. This is the time for CRH to stand up and be counted as a company of the highest ethical and moral standard by ending its relationship with its subsidiary.

This would be a very welcome announcement and one which would shine a light on CRH as a company that is willing to do all in their power to support and respect the protection of internationally proclaimed human rights.

I look forward to hearing from you.