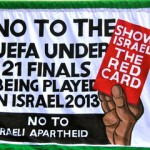 It took three months of hunger strike and the near death of a Palestinian footballer, held for three years without charge or trial under the ‘Unlawful Combatants Law’ which is itself illegal under international law, for the Israeli authorities to agree to a release deal. While we cautiously welcome the deal that should see Mahmoud Sarsak released on 10 July 2012, we are alarmed that Olympic squad goalkeeper Omar Abu Rois and Ramallah player Mohammed Nimr are also being held by Israel without charge. We maintain that a state which holds sportsmen as political prisoners is unfit to host an international sporting event. This petition, therefore, calls on UEFA to withdraw the honour of hosting the 2013 European Under-21 championship from Israel.