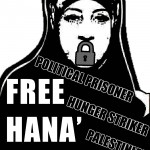 EDIT 29 March 2012: According to breaking reports in the media, Hana has ended her hunger strike and will be exiled to Gaza. We are glad that Hana, who was in extremely bad condition when last seen by medics, will be freed and hope that her strike has not resulted in any lasting ill effects. However, we are disgusted that instead of releasing Hana – who has been held without charge for more than two years in total – back to her home, the Israeli state seeks to dictate the whereabouts in which someone can live. Hana is a Palestinian from the West Bank and should be allowed to live there with her family and friends.

Today, a PHR-Israel volunteer doctor visited Ms. Shalabi in Meir Hospital in Kfar Saba, where she has been hospitalized since the night of 20 March. Following the visit, the doctor reported that on Saturday, 24 March, because of drastic deterioration in her blood test results, Ms. Shalabi agreed to receive calcium and Vitamin K, which protected her from immediate heart attack. Following this morning’s visit, the PHR-Israel doctor stated that Ms. Shalabi’s muscle atrophy and wasting have increased, which now includes her heart muscle. Ms. Shalabi still refuses nutrition aside from vitamins and salts in her water and is in danger of death. The hospital Ethics Committee is planning to meet early tomorrow morning and may consider the possibility of force-feeding, in disregard to the principles of medical ethics and the guidelines of the World Medical Association and the Israeli Medical Association.

As Ms. Shalabi continues her hunger strike, Addameer and PHR-Israel hold Israel accountable for her condition and call for her immediate release.

ACTION ITEM: Please use the Amnesty International website to send a letter of protest to the Israeli government.