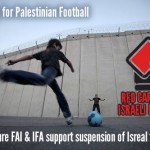 Sepp Blatter, the President of FIFA visited the Palestine-Israel region this week to discuss the issue of the Palestinian FA’s complaints against Israel in person. The outcome of the visit is that Israel remains intransigent on the main issues of complaint and the Palestinian FA intend to continue with their attempt to have the Israeli FA suspended from FIFA. Therefore it is vital that the FAI and IFA stand in support of their colleagues in the  Palestinian FA and support this just demand of an oppressed people.

NOTE: There is now a second petition being run by the global campaigning organisation Avaaz here that you should also sign by clicking here.

You can also sign the global petition to suspend Israel from FIFA by clicking here, and check out the website of the Red Card Israeli Racism campaign here. Fair Play for Palestinian Football: FAI should support the Palestinian request to suspend Israel from FIFA

I am writing to you on behalf of the Ireland-Palestine Solidarity Campaign (IPSC), and in association with Palestinian civil society and the Red Card Israeli Racism Campaign, concerning the motion put forward on 19th March 2015 by the Palestinian Football Association (PFA) to this year’s FIFA Congress calling for the suspension of the Israel Football Association (IFA) until Israel complies with four main football-related conditions.  The full text of the PFA motion is attached.

It was expected that the PFA motion be debated and voted on under agenda item 4 regarding suspensions and expulsions.  However, it has been included later under agenda item 15 as a “discussion” item.  Bearing in mind the pressure being exerted by the Israeli FA to have the motion put aside, we are concerned that the clear, formal requirement to discuss and vote on the motion may be ignored.

We are therefore writing to you to request that the Football Association of Ireland makes every effort to ensure the PFA’s right to present their motion to Congress is respected and that the motion is properly discussed and voted on in a transparent and democratic manner without interference from any officials. We also urge that FAI supports the PFA motion which seeks fair play for Palestinian football. We understand that the Israeli FA is saying that it is separate from the government which funds and controls it; the lie is given to this line of argument by the very fact that the Israeli government – as reported in today’s Israeli daily newspaper Ha’aretz – is “waging a worldwide campaign … aimed at foiling a Palestinian attempt to get Israel suspended from FIFA”, a campaign that includes attempts to blacken the name of Palestinian footballers, the PFA and the chief of the PFA himself.

We would also like to raise our concerns regarding the UEFA Women’s Under 19s Tournament. These finals, which were awarded to Israel, will take place in July and it is worrying that there is still no information available about the venues to be used for these matches.  We are particularly concerned that grounds in East Jerusalem will be used as the international community does not recognise Israeli sovereignty there. While we are opposed to this tournament taking in place in Israel in general, we are doubly concerned about East Jerusalem and are therefore seeking assurances that matches will not played in such a controversial location.

We would very much appreciate if you could support the PFA motion as an act of solidarity with a football federation representing players and coaches who are subject to travel restrictions, checkpoints, detentions, assault, discrimination and on occasion even killing, by Israeli occupation forces. As long as such injustice is experienced by the members of the Palestinian Football Association, it is crucial that other football associations stand against it and hold all FIFA members accountable when their government sponsors are in breach of international law.

The FIFA Congress decide to suspend the Israel Football Association (IFA) from FIFA until:

1.1)  The Israel Football Association, or Israeli authorities, submit written guarantees to FIFA  that it will respect the FIFA statutes by recognizing that the Palestine Football Association is the sole governing body responsible for organizing and supervising football in all of its forms in the territory of Palestine (Article 10-1 of the FIFA Statutes). This warrants that all football activities organized on Palestinian territories by clubs, players and officials affiliated to the Palestine FA can be developed unhindered.

1.2)  The following clubs are banned from playing football in competitions organized by the IFA because they are located in the internationally-recognized territory of Palestine and because they participate in these competitions without the FIFA authorization defined as per Article 84 of the same FIFA statutes (as mentioned in the PFA letter to FIFA dated 30 November 2014).

1.3)  The Israel FA shall fully recognize that the Palestine FA is entitled to enjoy the following rights without any restriction or intervention from the Israeli occupation or any other third party

(i)  The right of movement of football people and goods into, out of, and within Palestine including East Jerusalem.

(ii) The right of the PFA to develop football infrastructure and facilities in the territory of Palestine including East Jerusalem.

(iii)  The right to import and export sport goods in and out of Palestine.

1.4)  The Israel FA shall uphold its obligation to FIFA in taking a stance against discrimination and racism (Article 3 of the FIFA statutes) by taking serious measures against racism and human rights violations within its area of jurisdiction.

After this guarantee will be given to FIFA, a reliable and robust monitoring system would be established by FIFA to ensure the full implementation of these rights based on a memorandum of understanding which will be signed by FIFA, the PFA, the IFA, and witnessed by the AFC and the UEFA.

WHEREAS and finally, the PFA reaffirms solemnly and officially that:

(i)     Its only goal is to obtain for the Palestinian football community the same rights defined by the FIFA Statutes and enjoyed by the all other MAs,

(ii)   The security considerations cannot constitute the alibi for arbitrary decisions taken without any justification,

(iii) the PFA fully recognizes the authority of the IFA on its football and look forward to mutual recognition in line with the FIFA Statutes,