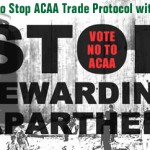 UPDATE (23/10/2012): Sadly, the ACAA vote passed this evening by 379 votes to 230. The IPSC would like to thank everyone who mobilised on this issue and all the MEPs who voted against rewarding Israeli Apartheid and war crimes. It is shameful to see the EU, the recent recipient of the Nobel Peace Prize, vote to improve trade relations with a serial human rights abusing state like Israel.

Last month, organisations and activists across Europe took action together to persuade the International Trade Committee of the European Parliament to block a new trade protocol with Israel. Thousands of people signed petitions and hundreds more wrote to their MEPs. The vote was very close and if just one more MEPs had voted with us, the agreement would have been blocked.

CLICK HERE TO TAKE ACTION – A COUPLE OF CLICKS IS ALL IT TAKES!

The agreement still has to be approved by a full vote of the European Parliament that will take place on October 23. If passed, the Agreement on Conformity Assessment and Acceptance of Industrial Products (ACAA) would remove barriers to trade between Israel and member states in industrial products, especially pharmaceuticals. The vote is likely to be close.

Such an agreement would strengthen EU-Israel relations and would reward Israel for its continued violations of international law.

It takes just a few minutes to write to your MEP calling on them to reject the agreement using our handy e-tool below. Your message will be even more powerful if you make a few changes to personalise it.