A new series of talks on Palestine organised by Kildare IPSC 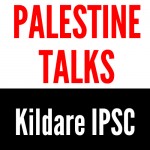 The Kildare branch of the Ireland-Palestine Solidarity Campaign (IPSC) are delighted to announce a series of talks on Palestine and the Israeli occupation will take place in Naas over the next two months. The talks will take place on Monday evenings in the Town House Hotel at 8pm. The talks are free of charge though contributions will be gratefully accepted on the night. We’ve managed to put together a great line up of speakers who are all experts on the Palestinian situation. Below is the list of events, dates, and short bios of the speakers. We look forward to seeing you there.

We have invited guest speakers many of whom are experts on this topic, to inform us on the matter under the headings below.

Each speaker will talk for approximately 45 minutes followed by a 15-minute Q&A session.
If you’re ever wondered about the whole Palestine/Israel question, this series of talks will provide an informative backdrop on the whole situation.

David Landy is an assistant professor in the Department of Sociology, Trinity College Dublin where he teaches on Israel/Palestine and social movements. He has been active in the Ireland Palestine Solidarity Campaign for many years and his social movement activities inform his research and vice versa. He is author of Jewish Identity and Palestinian Rights: Diaspora Jewish Opposition to Israel.

Ronit Lentin was born in Palestine prior to the state of Israel and grew up in Israel, moving to Ireland in 1969. She has published extensively on Israel-Palestine, racism in Ireland and migrant activism. Among her books: Israel and the Daughters of the Shoah: Reoccupying the Territories of Silence; Racism and Antiracism in Ireland; Race and State; Women and the Politics of Military Occupation: Palestinian and Israeli Gendered Narratives of Dislocation; Thinking Palestine; Co-Memory and Melancholia: Israelis memorialising the Palestinian Nakba.
Ronit is chair of Academics for Palestine and is currently working on a book on Palestine and race.

Elaine Bradley is a human rights activist and organisational consultant. Formerly the CEO of Volunteering Ireland, Elaine works for the development of just, ethical and sustainable society through her work with organisations and groups and has worked with governments and institutions including the EU, UN and the PLO.
Since 2012 she has spent 18 months living and working in Palestine, mostly in Gaza. She is currently working on a doctoral thesis Mapping Israel’s Regime in Gaza onto Frameworks of Genocide. She is a founding member of Academics for Palestine and an activist with the Boycott, Divestment and Sanctions movement.

Dr Brendan Ciarán Browne is Assistant Professor of Conflict Resolution at Trinity College Dublin (in Belfast). He holds an LL.B and LL.M in Law, and Law & Human Rights from Queen’s University Belfast. His PhD, a comparative analysis of commemorative events in Ireland and Palestine, was completed through the School of Sociology at Queen’s University Belfast (2012). Dr Browne’s most recent appointment was as Assistant Professor in Human Rights and International Law at Al Quds (Bard) University, Occupied Palestine where he taught between January 2015- December 2015. Dr Browne’s research interests are situated around political conflict, the impact of post-conflict reconstruction on children and young people, commemorating conflict and conducting research in conflict zones. His research is heavily focused on Palestine where he has been living and working since 2008. He has a number of books forthcoming, including a co-authored piece (with Dr C. Dwyer & Prof. P. Shirlow) examining the impact of growing up during this period of transition away from conflict in the north of Ireland, and a co-edited volume on the impact of researching violence.’

Following on from their recent annual trip to Palestine, these three individuals recount their experience as they travelled from Ireland to the West Bank, Palestine. They share how they were treated whilst passing through the various security checks and how their pre-arranged meetings with the various groups from both sides of the conflict were conducted. They also discuss how life in Palestine has changed over recent years.