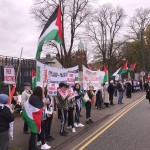 Today the Ireland-Palestine Solidarity Campaign (IPSC) hosted a symbolic demonstration outside the British Embassy in Dublin to commemorate the centenary of the Balfour Declaration. At the gathering, the IPSC handed in a letter calling for Britain to take action to atone for its historic and ongoing role in Israel’s oppression of the Palestinian people.

On 2nd of November 1917, in furtherance of its imperial ambitions in the Middle East, the British Government under Lloyd George made a promise to the Zionist Federation that it would ‘establish a national home for the Jewish people’ in Palestine. This promise, contained in a letter sent by Foreign Secretary Lord Arthur Balfour, was made without consulting the people of Palestine who hoped for independence from the imperial powers. It came to be known as the ‘Balfour Declaration’.

Speaking at today’s protest, IPSC Chairperson Fatin Al Tamimi said: “From the ethnic cleansing of Palestine between 1947 and 1949, to the occupation of the West Bank and Gaza which has entered its 50th year, to the continued land theft and colonisation of Palestinian land with illegal settlements, to frequent attacks on Gaza, to the imprisonment and torture of hundreds of thousands people, to flagrant human rights abuses – the people of Palestine continue to live with the disastrous legacy of the Balfour Declaration.

“Standing here outside the British Embassy, we condemn the arrogant words of the British Prime Minister Theresa May, who says she is “proud” of the Balfour Declaration and the establishment of the ethnocratic state of Israel at the expense of my people, the indigenous Palestinians. It is clear that, despite the passage of a century, the colonial mentality of the British political elite remains deeply rooted. Britain refuses to recognize that Israel continues to arrogantly deny the Palestinians’ right to self-determination and fails to admit its own complicity in Israel’s oppression of the Palestinian people.”

IPSC Vice Chair, John Dorman, said: “The shameful and cowardly betrayal of the Palestinian people may have it roots in the 1917 Balfour Declaration but the international community’s complicity through silence or direct support for Israel has continued to enable the rogue state’s brutal and racist colonial project in Palestine. Britain’s immoral, discriminatory and criminal pledge to give Palestine to the Zionist movement became the catalyst for the Nakba, and now 100 years later the ethnic cleansing of Palestine continues with appalling ferocity while the EU remains silent. We in Ireland however, with our shared history of colonisation, will not be silent but will shout out loudly in solidarity with the Palestinian people in their struggle for Freedom, justice and equality. Sumud!”