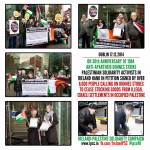 On Wednesday 17th December members and supporters of the Ireland-Palestine Solidarity Campaign handed in a petition signed by over 8,000 people calling on Irish supermarket chain Dunnes Stores to make a public commitment that their outlets will not stock goods produced in illegal Israeli settlements in the occupied Palestinian territories.

The petition – signatures for which were collected on streets around Ireland during 2014 – was initiated to coincide with the 30th Anniversary of the 1984 Dunnes Stores anti-Apartheid strike by IDATU (now called Mandate) trade union members in Dublin’s Henry Street, and calls on Dunnes to support justice for Palestinians.

You can watch a video of the event on the Irish Times website here. IPSC Vice-Chairperson, Fatin Al-Tamimi, a Palestinian woman from Hebron who handed in the petition, said, “we are calling on the management of Dunnes Stores to give a public commitment that their stores will refuse to stock products from illegal Israeli settlements in the occupied Palestinian territories. Israeli settlements are illegal under international law and represent grave breaches of the Fourth Geneva Convention, thus stocking goods grown or manufactured in such settlements can only be considered collusion with illegality and Israel’s modern-day Apartheid regime in Palestine. 2014 is the 30th anniversary of the of the Dunnes Stores workers’ Anti-Apartheid strike. We ask Dunnes Stores to be on the right side of history this time.”

Renowned signer Honor Heffernan, who also handed in the petition explained the reason she was present to support the campaign saying,”‘I’m here today to show my solidarity with the people of Palestine, and I think one of the best ways to do this is by not buying Israeli products, especially those that come from illegal settlements. It’s time for Dunnes to listen to the voices of the people of Ireland, and the people of Palestine and to stop stocking settlement goods.” John Douglas, President of the Irish Congress of Trade Unions and General Secretary of Mandate, the retail workers union, was unable to be present but sent a message of solidarity and support for the petition saying “. Today, thirty years after the anti-Apartheid strike, Dunnes Stores should stand on the side of justice. Refusing to stock goods from illegal settlements is the very least they can do to for the Palestinian people who live under Israel’s repressive occupation regime.”

Martin O’Quigley, Chairperson of the IPSC said that “it is important that we are here to mark the thirtieth anniversary of the anti-Apartheid strike, because just as apartheid was wrong for South Africans, so too is it wrong for Palestinians. 30 years ago workers in Dunnes Stores refused to handle goods from Apartheid South Africa, and were forced – by management’s refusal to cease stocking South African products – to go on strike in order to stand in solidarity with their sisters and brothers living under apartheid. The strike ultimately led to the government banning South African fruit and vegetables from Ireland. So too, today we call on our government to take action to ban Israeli imports, the profits from which help fund horrendous war crimes and attacks on civilians like we saw during Israel’s summer slaughter in Gaza. While the recent votes by the Dáil and Seanad to recognise a Palestinian state are to be welcomed, concrete action and sanctions are needed to help pressure Israel and to support the Palestinian struggle for freedom, justice and equality.”

Mr. O’Quigley concluded, saying that “2014 was also designated International Year of Solidarity With the Palestinian People by the UN. The Palestinian people’s ongoing fight for their rights demands that every year is an international year of solidarity, until there is a just peace for Palestinians.” The hand-in came the same week as the official launch – on the first day of the Jewish festival of Hanukkah – of a new group made up of Jews living in Ireland called Jewish Voice for a Just Peace, which was warmly welcomed by the IPSC. Also this week, the European Parliament voted by a large majority to support “in principle recognition of Palestinian statehood and the two-state solution,” but which did not follow some European national legislatures in backing immediate recognition of a Palestinian state.

Finally, the IPSC would like to take this opportunity to offer our condolences to the family, friends and colleagues of the late Brendan Archbold who sadly passed away late last month. Brendan was a lifelong trade unionists and principled fighter for social justice and human rights. He was deeply involved in the 1984 anti-Apartheid strike, and maintained his commitment to international solidarity right up until his untimely death. Brendan was a strong support of the Palestinian cause, and in 2010 was present outside Dunnes Stores when the IPSC handed in a previous petition calling on the supermarket to boycott all Israeli goods. Brendan Archbold, Rest in Power. A passing member of the public stops to sign the petition