Happy Christmas from the IPSC: Let’s make 2017 a year of freedom & justice for Palestinians 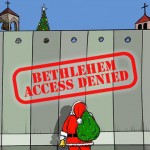 I would just like to take a moment to thank you for your support over the past year and to wish you all the best for the Christmas season and the new year.

I would also like to invite those of you who can to come along to our annual New Years’ Eve vigil for Palestine on Dublin’s Ha’penny Bridge, between 2pm and 3pm on Saturday 31st December. It’s a nice way to say goodbye to the old year and ring in the new. (See here for more details)

As you know, 2016 was an incredibly difficult year for Palestinians living under the occupation, and unfortunately things look set to only get worse in 2017 with the Trump administration’s accession to power in the United States.

We promise to redouble our efforts to both raise awareness of the situation for Palestinians – in the occupied territories, inside Israel and in the refugee diaspora – and to continue to play our part in building the global Boycott, Divestment and Sanctions (BDS) campaign for freedom, justice and equality for the Palestinian people.

2016 was also a difficult year for the IPSC. We are sure that our work for BDS and Palestinian rights is the reason that our bank accounts were unilaterally and unjustifiably shut down by the Bank of Ireland in September. This closure made our work in the second half of 2016 very difficult, nevertheless thanks to your support, even in the midst of this crisis, we were proud to be able to bring three important Palestinian speakers to visit Ireland and speak directly to ordinary people, politicians and other civil society groups. 2016 also saw a huge victory for the BDS movement in Ireland when Irish cement multinational CRH divested from its Israeli subsidiary that was supplying cement for the illegal wall, settlements and checkpoints in occupied Palestine after a long campaign led by the IPSC. We also successfully ensured the Palestinian issue was raised during the general election, and has continued to be an issue in the Irish parliament ever since.

2017 will see a number of important anniversaries for Palestinians: 100 years since the British Empire issued the Balfour Declaration promising to give land that wasn’t theirs to the Zionist movement; 70 years since the beginning of the Nakba, the 1947-49 ethnic cleansing of Palestine to creat the state Israel; 50 years since the conquest and colonial occupation of the West Bank, Gaza Strip and Golan Heights by the Israeli military; and 30 years since the outbreak of the popular political uprising by Palestinians in the occupied territories known as the ‘first intifada’. We also hope that it will be the year that we see real and concrete action taken by Western governments and corporations to being about an end to the injustices faced by the Palestinian people.

In 2017 we in the Ireland-Palestine Solidarity Campaign will be to the forefront in pushing for positive change, to make it a year of freedom and justice – we hope you will join us!

I wish to leave you with a short Christmas video from Dabka dancers in Ramallah.

Yours in solidarity and hope,