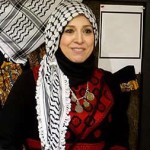 The Ireland-Palestine Solidarity Campaign (IPSC) supported the protest on Thursday 17th Novemeber in opposition US President-elect Trump that took place outside the US Embassy.

The protest was called by a coalition of groups including the IPSC, United Against Racism, Friends of the Earth, ROSA and People Before Profit-Anti Austerity Alliance. Organisers said they were gravely concerned with the danger the Trump presidency poses, to the people of the US, Ireland, Palestine and the whole planet.

IPSC Chairperson Fatin Al Tamimi was due to deliver the following speech at the demonstration, but could not make it due to unforeseen circumstances:

In my life I wear many hats – I am a woman, an immigrant, an exile, a Muslim, an Arab, an anti-war and anti-apartheid activist, a mother, and I am a Palestinian. These are some of the identities that make up my whole person. And although today I am here to speak about what the US election could mean for justice in Palestine, before I do that I just want to stress that if I lived in the US, Donald Trump, his vile ideology and the movement that has sprouted up around him would pose a serious threat to every one of these identities.

The election of Trump will serve to further normalise this kind of behaviour, and in this legitimisation of overt – and often violent – racism, misogyny, xenophobia, homophobia, climate change denial and white supremacism in the US, you can be sure that these kinds of outlooks and actions will grow in number in Ireland and elsewhere in the world. Unfortunately, it appears we are heading toward dark times.

A black future also looms over my homeland, Palestine.

Early indications show Trump’s prospective cabinet and supporters are a who’s who’s of anti-Palestinian thought and action. Rudy Guiliani is being touted as Secretary of State. This is man who believes that it is “unpatriotic not to love Israel” and that the US “should be 100 percent behind” the apartheid state.

Trump’s main foreign policy advisor is Walid Phares, a Lebanese-American who was key ideologue of a far-right Christian militia that committed war crimes during the Lebanese civil war, including being the main perpetrators of the horrendous Sabra and Shatila massacres of thousands of innocent Palestinians. Phares is also a raging Islamophobe who expounds vile racist conspiracies about Muslims.

Trump’s chief strategist will be Stephen Bannon, a leading figure of the so-called ‘alt-right’, a cheerleader for Israeli war crimes and apartheid, and a racist, Islamophobic, misogynistic and antisemitic Zionist. If it seems strange that someone who is racist against Jewish people could also be a major supporter of Israel, remember that antisemitism and Zionism have a symbiotic relationship, both feed off each other – a dynamic recognised by modern Zionism’s founder Herzl who wrote approvingly that “the anti-Semites will become our most dependable friends, the anti-Semitic countries our allies.”

Finally, we should not forget the man who injected millions upon millions of dollars into Trump’s campaign, Sheldon Adelson. Adelson, a multibillionaire, is an outspoken defender of Israeli crimes, an apologist for apartheid who opposes any Palestinian state and believes that Palestinians are a “made up” people. He funds propaganda trips for students where they hang out with Israeli occupation forces in Palestine. He is one of the main people leading the fight against the peaceful Palestinian-led Boycott, Divestment and Sanctions movement, and he claims that the Palestinian people’s struggle for freedom, justice and equality is not a legitimate resistance to decades of oppression and colonisation, but instead reflects a desire to exterminate the Jewish people. He also believes the US should drop a nuclear bomb on Iran. Adelson is close to Israel’s rightwing Prime Minister Benjamin Netanyahu, so close that he funds a free daily newspaper that sole reason or existence is to act as a trumpet for Netanyahu’s anti-Palestinian policies.

It is noticeable that AIPAC, the main Israel lobby group in the US, has just removed any reference to a Palestinian state from its talking points, and that Trump has stated his desire to move the US Embassy to Jerusalem, which would send a strong signal to the world in normalising the illegal annexation and occupation of Palestinian East Jerusalem by Israel.

We in the Ireland-Palestine Solidarity Campaign believe President-elect Trump, and the hatred that he represents, is a danger to every person on the planet. Yes, these are scary times. But we people of conscience must not, and will not, stand on the sidelines – we will redouble our efforts in the fight against colonialism, apartheid, racism and war crimes. In Palestine, Ireland, the US and everywhere else we must organise and build effective and creative movements of resistance that will liberate us all.