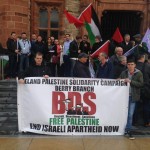 We carry below a statement we were sent via our colleagues in Jewish Voice for a Just Peace – Ireland, regarding comments made my Northern Ireland First Minister Arlene Foster and Gary Middleton MLA concerning the historic decision by Derry City and Strabane District Council to support the Palestinian-led Boycott, Divestment and Sanctions (BDS) movement aimed at pressuring Israel into ending its occupation of Palestine and fulfilling its obligations under international law.

We agree with JVJPI that seeking to essentialise Jewish thought, experience and action into something that is inherently not just associated with, but homogeneously supportive of, the state of Israel and its ongoing crimes against against the Palestinian people is fundamentally wrong and offensive to Jewish people everywhere. Such views, sadly, also mirror those of antisemites who would seek to use Israel’s criminal conduct to stir up hatred of Jewish people everywhere.

We are disappointed and offended by statements by the First Minister, Arlene Foster and DUP MLA, Gary Middleton, publicised this week.

Most of the Jewish community in Derry and Strabane are absolutely delighted that our Council supports Boycott Divestment and Sanctions, until Israel complies with international law. Indeed, Jewish people across Northern Ireland supports sanctions against Israel (see  founding statement below from Jewish Voice for Just Peace – Ireland.)

When the issue was raised in Stormont this week, the First Minister went straight to the words of the Rabbi in Belfast – thus conflating legitimate criticism of Israel with Judaism. Gary Middleton is wrong to say “It is sending out a very bad message to the Jewish community of Northern Ireland” (front page of the Londonderry Sentinel today).

Within Jewish communities, there are diverse views on Israel’s human rights’ abuses. Just like in other communities, Zionists tend to believe Israel is justified in its actions, while non-Zionists do not. These two DUP speakers have denied the views of non-Zionist Jews. They have also conflated Jews with Zionists, which is frankly offensive.

Politicians and media should share space for other views from within the Jewish community in Northern Ireland.

We would also like to wish everyone “shonah tovah” – a happy new year for Rosh Hashonah 5777.

As Jewish people, we oppose the cynical deployment of the anti-Semitic label, and the history of the oppression of the Jewish people, to silence those who legitimately criticise Israel. We are part of a long historical Jewish tradition of fighting oppression and standing up for peace and justice for all.

The ongoing occupation of Palestinian land, the siege of Gaza, brutal military repression and violence, the rejection of meaningful peace, and the growth of far-right racism and fundamentalism in Israel have led to the formation of pro-peace and pro-justice Jewish groups throughout the world.

Our group is proud to be part of this pro-Palestinian Jewish community, and to join the global movement that supports the Palestinian struggle for their human rights and for justice.

We support the application of the norms of international law and human rights to Israel/Palestine. We also support those groups that are working to create a just and lasting peace in Palestine.

*We support boycott, divestment and sanctions against Israel, as called for by Palestinian civil society.*

Not in our name!