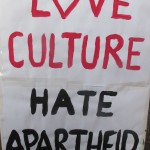 According to a story in the Irish Times, the Israeli Embassy and Teddy D Promotions, along with the venue itself, appear to have attempted to conceal the involvement of funding from the Israeli state in a upcoming gig by Israeli jazz trumpeter Avishai Cohen in the National Concert Hall in Dublin.

This attempt at deception illustrates just how utterly toxic Brand Israel has become in the eyes of the Irish public – and begs the question as to why funding from Apartheid Israel was accepted in the first place. Unfortunately, due to the involvement of Israeli state funding, this concert is in violation of the Palestinian call for a cultural boycott of the Israel – so we are asking people who care about Palestinian rights to boycott the concert as long as such funding is in place.

Sadly, in the article the National Concert Hall says it will continue to work with the Israeli Embassy – the emissary for the serial human rights violating, war crime committing, mass murdering Apartheid state in Ireland – as it “continues to develop diplomatic relations with all embassies who wish to support cultural events at the hall”. This is doubling dissapointing, coming as it does in a week when 13 Irish pubic figures, including musical artists Christy Moore, Mary Coughlan, Donal Lunny, Honor Heffernan and Frances Black, published an open letter calling for support for the Palestinian Boycott, Divestment and Sanctions campaign.

The Irish Times story quotes some of the IPSC comments on the matter (meanwhile the Israeli Embassy spout a load of mendacious propaganda, naturally). For the record, here is the full statement the IPSC sent to the Irish Times:

“The IPSC supports the Palestinian civil society call for a cultural boycott of the Israeli state as a means of applying pressure to end Israel’s occupation and its human rights and international law violations. As with Apartheid South Africa before it, a cultural boycott is an important and effective means of both protesting against injustices inflicted on a colonised people. It also exposes the Israeli state’s abuse of the arts as an exercise in ‘culture-washing’, a means to distract from Israel’s atrocious human rights record.

“To those who say that art is somehow above politics, we ask you to listen to the Director-General of Israeli Foreign Ministry, Nissim Ben-Shitrit who said that Israel sees ‘culture as a hasbara [propaganda] tool of the first rank, and [does] not differentiate between hasbara and culture’. In the past, artists in receipt of state travel funding have been contractually obliged to ‘promote the policy interests of the State of Israel via culture and art’ while abroad.

“The cultural boycott is not aimed at individual Israeli performers like Avishai Cohen, but because the event in the NCH is in receipt of funding from the Israeli state, it is in violation of this call. We urge the promoter, the artist and the venue to respect the wishes of the oppressed Palestinian people by rejecting this sponsorship. Such a move would be following in the footsteps of the Dun Laoghaire Festival of World Cultures, the Irish Film Institute and the Listowel Writers’ Week festival all of whom have rejected Israeli state funding in the past.

“It is deeply distressing that a taxpayer funded national institution like the NCH would ignore the boycott call from Palestinian artists, academics, human rights activists and others by hosting any event sponsored by the apartheid Israeli state.

“It is telling that Brand Israel has become so unpopular with the Irish public that promoter, artist and venue appear to have attempted to conceal the involvement of that state. If Israeli funding is too toxic to be acknowledged, then surely it should not be accepted at all.”